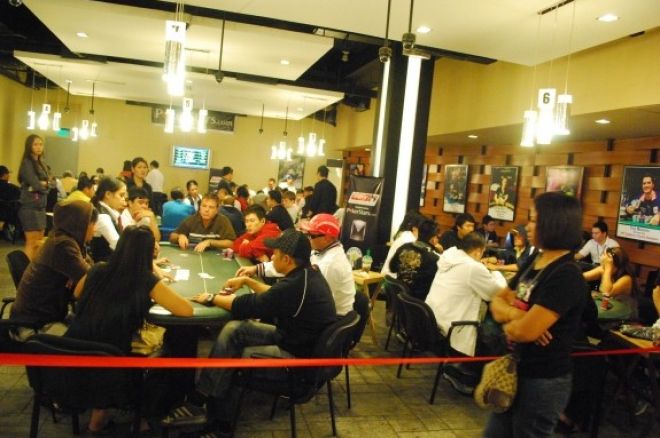 Undoubtedly the largest and most popular poker room in the Philippines, the Metro Card Club may also be the biggest in the entire Asian region.

Located at the Metrowalk shopping complex in Pasig City, it has developed into the go-to place for many of the country’s top players – big names such as Neil Arce, Kent del Rosario, and Wally Sombero. It is open 24/7 except holidays and has daily cash games and tournaments for players of all levels.

The card room first opened in August of 2007, becoming one of the Philippines’ first poker rooms operating outside of a casino. It started with 11 tables but is now up to 30 tables thanks to the growing popularity of the game.

Anyone who walks into the card room late in the afternoon will often see at least 15 cash game tables open as well as around 6 tables allocated for tournaments. The most popular cash games are at the Php 10 / Php 20 levels but the stakes can go all the way up to Php 100 / Php 200.

Tournaments at all levels of buy-ins are also held at the Metro Card Club, with each and every one offering a guaranteed prize pool. In fact, the Metro is known for having the biggest tournaments and guarantees for a local room.

For example, last December’s Metro Anniversary Special, which featured a guaranteed prize pool of Php 10,000,000, attracted 530 players from the Philippines and across Asia.

The big tournaments are not the only draw, though. The card room holds daily tournaments with buy-ins going as low as Php 300 (for the Metro 300 on Sundays) and Php 500 (for the Metro 500 tournaments on weekdays). Saturdays are usually the biggest tournament days at the Metro, with a rotating series of tournaments guaranteeing prize pools of Php 200,000, Php 300,000, and even Php 500,000.

With all the cash game and tournament action in full swing at the Metro every day, the poker room is considering expanding its gaming area sometime in the future.

“In tournaments, we sometimes have to close down cash tables because of all the player entries. The market here in the Philippines is really growing,” said Miguel Cuneta, who is in charge of the card room’s marketing. “The whole poker scene, even our smaller competitors, has been growing, and you can really see the market accommodating more players.”

He also added that the features of the Metro Card Club make up for the lack of special bonuses or promotions such as bad beat jackpots. “We don’t have any bonuses or jackpots but we always guarantee our tournaments. Also, there are so many cash game tables to choose from, which is good for the players,” he said.