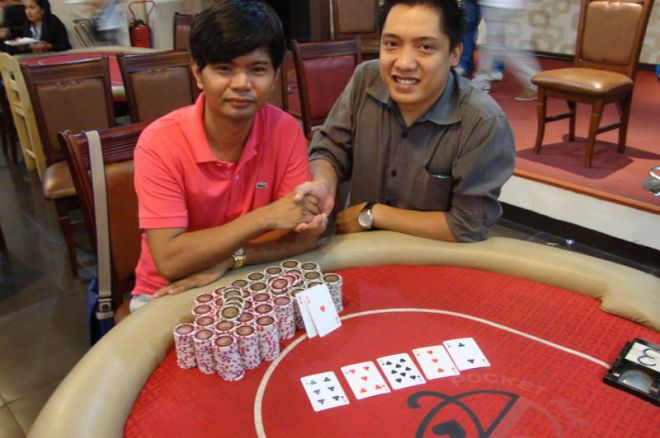 Ramil Tandoc won the recently concluded Pocket Aces Mega Million tournament in Manila to take home Php 185,000 in cash and a seat to the upcoming PAGCOR Chairman’s Cup worth Php 135,000.

, which had Piñon’s J-8 dominated. The turn and river did not provide help for Piñon, giving all the chips on the table to Tandoc. For finishing second, Piñon won Php 170,000.

Fittingly, it was pocket aces that nailed the title for Tandoc at the first-ever Pocket Aces Mega Million tournament.

“It feels good to win again, it’s been a long while,” he said.

The local pro is known mostly for his fifth place finish in the 2008 Asia Pacific Poker Tour (APPT) Manila main event, where he won Php 1,446,660.

A total of 140 players participated in the Php 1,000,000 guaranteed tournament, which had a buy-in of only Php 5,000 + Php 500. Despite the huge overlay, the Pocket Aces poker room stood by their word and pushed through with the tournament.

Poker room operations consultant Mico Rilloraza was happy with how the event went. "The tournament ran really well and I learned a lot over the last few days. I'm glad it's over, though," he said.

Pocket Ace Poker Sports Club is located on MIA Road in Parañaque City, Philippines. The Mega Million is part of the soft opening of the poker room, which features cash games and regular tournaments.