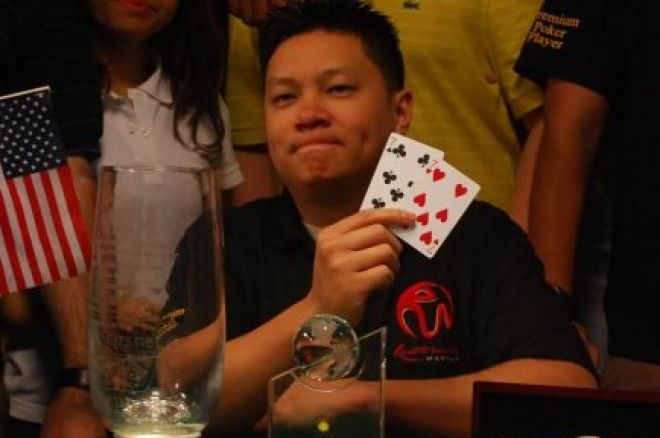 Nguyen entered the final table just sixth in chips and would need a lot of help to build up his stack. It worked out just fine for him as he steadily accumulated chips through a lot of aggressive play and good timing until he became the chip leader in the later stages of the final table.

It would be a difficult final table to navigate as Nguyen would have to face the likes of Terrence Chan and Charles ‘Mr. Macau’ Chua – two of the most well-known and accomplished players on the Asian poker scene.

In the end, Nguyen’s big stack would carry him to heads-up play, where he would find himself a tough adversary in Scotland’s Gordon Huntly.

Dictating the pace of their heads-up match, Huntly took over the chip lead with a big double-up after he hit a higher diamond flush with

Undaunted, Nguyen climbed back through aggressive play until both players would get their money all-in with the bigger-stacked Nguyen holding

. The board would run out

, giving Nguyen the title and sending his supporters into a frenzy.

The PAGCOR Chairman’s Cup was a US $1,000,000 guaranteed tournament held from March 20-25. The tournament was mostly held at the Manila Pavilion Hotel and Casino while the final table was staged at the SMX Convention Centre in the SM Mall of Asia complex.

The tournament exceeded its guarantee as 430 players signed up to play in the event. The field would include international poker pros, including renowned poker pro and author Barry Greenstein, who played at the Metro Card Club in Pasig City over the week. Joining him at the PAGCOR Chairman's Cup were big names like Tony Hachem and The Poker Pack members Nam Le and David 'Chino' Rheem.

PokerStars Team Asia pros Celina Lin, Bryan Huang, Tae Jun Noh, and Raymond Wu were also a part of the large Asian contingent that were in Manila for the big event.

The next APPT event will be APPT Macau, which will be held from May 18 to 23 at the PokerStars Macau poker room at the Grand Lisboa Casino.