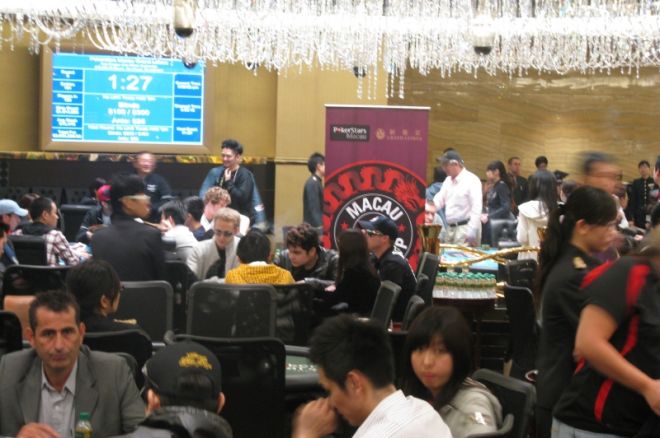 A very short but eventful Day 2 at the Red Dragon main event of the Macau Poker Cup (MPC) saw 74 players eliminated in a span of about five hours.

When all the dust had cleared, only 29 players were left from the initial Day 2 field of 103. The chip leader is Norwegian player Kai Paulsen, who has a massive stack of 458,500. In comparison, most of the remaining stacks are below 200,000.

Day 2 started tonight at around 7:30 pm, a mere hour after Day 1B had finished. Tournament director Danny McDonagh had scheduled just around five hours of play for the day (or more appropriately, night), but it did not matter as the action started picking up as the blinds rose throughout the 40 minute levels.

Still in the mix is Team PokerStars Asia pro Raymond Wu, who has 162,000 in chips. Fellow team member Tae Jun Noh made it to Day 2 but was eliminated in the last hour before play was stopped for the day.

Also among the survivors are three female players, including Japan’s Yu Kurita. Tournament director McDonagh mentioned that if one of them went on to win tomorrow, it would mean three consecutive female Red Dragon champions. Team PokerStars Asia pro Celina Lin won it in July last year while Kitty Kuo won the event in October.

Day 3 is scheduled to take place tomorrow at 12:10 pm here at PokerStars Macau.