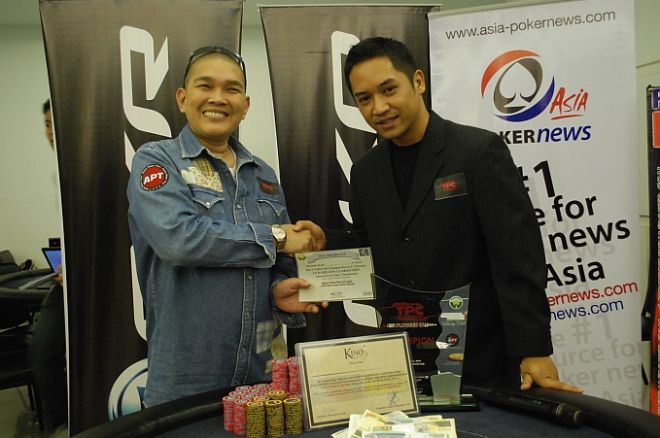 Mark Pagsuyuin outlasted a field of 173 players to win Plugged In, the first-ever tournament of The Poker Circuit (TPC).

One of the most recognizable players on the Philippine poker scene, Pagsuyuin outlasted a tough field at the Big Ace Liberty Club in Mandaluyong City to take down the win.

He had to rise through the ranks to do it as he came into the final table with 241,000 in chips – giving him the second-smallest stack on the table. It did not matter to him as he kept building up his chips through some timely moves and lucky draws until he found himself heads-up with Bong Gloria.

The two players battled for a few hands before the money finally all went-in pre-flop with Gloria holding the bigger stack. Pagsuyuin was slightly ahead with

to keep Pagsuyuin ahead. He paired one of his cards as a

came on the turn. However, that card gave Gloria outs to a straight. The river blanked with a

, though, giving Pagsuyuin with the massive double-up and crippling Gloria’s stack at about 470,000.

A few hands later, the money went all-in again. This time, it was Gloria slightly ahead pre-flop as he held

. However, the board ran out

to counterfeit his cards by giving Pagsuyuin the top two-pair with the higher kicker.

The TPC: Plugged In tournament was held at the Big Ace Liberty Club in Mandaluyong City, Philippines, from March 13-17, 2010. It guaranteed a prize pool of Php 1,000,000 and was an Asian Poker Tour (APT) accredited event.

In addition, the winner received a bonus seat worth HK $8,000 to the Asian Poker King Tournament this April 22-26 at the StarWorld Hotel and Casino in Macau. That tournament, which is also APT-accredited, features a HK $1,000,000 prize pool.