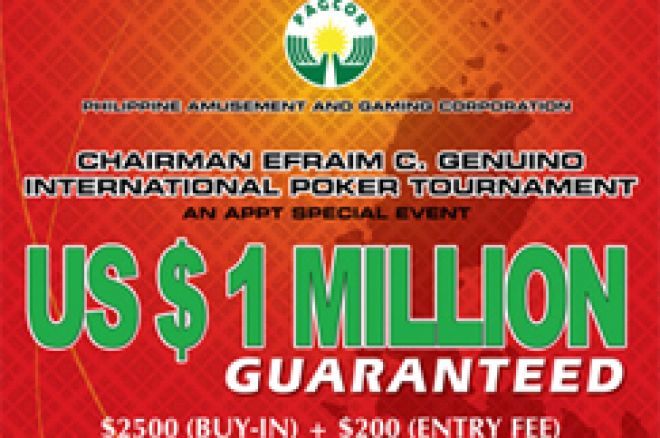 The PAGCOR Chairman’s Cup, which is officially known as the “1st PAGCOR Chairman Efraim C. Genuino International Poker Tournament”, is the biggest poker tournament to hit the Philippine poker scene so far this year.

Tagged as an Asia Pacific Poker Tour (APPT) special event, the tournament features a $US 1,000,000 guaranteed prize pool. It will be held from March 20-24 at the Manila Pavilion Hotel and Casino, while the final table will be held at the SMX Convention Center in Pasay City on March 25. Start times are set at 1:00 pm Manila time. Buy-in is set at US $2,500 + US $200.

Many top Asian and international pros are expected to participate in the event. The Poker Pack, for example, will be represented by Nam Le and David “Chino” Rheem, two of the most accomplished poker players in the world. In addition, Nam’s brother Tommy Le, a top poker pro himself, will also be playing.

In addition, Team PokerStars Asia pros such as Bryan Huang, Raymond Wu, and Celina Lin are expected to play in the event.

Filipino poker players will also be scattered throughout the field, as poker rooms throughout the Philippines have been conducting satellites to the event for months.

Join us tomorrow on our live reporting to get all the latest information from the PAGCOR Chairman’s Cup!