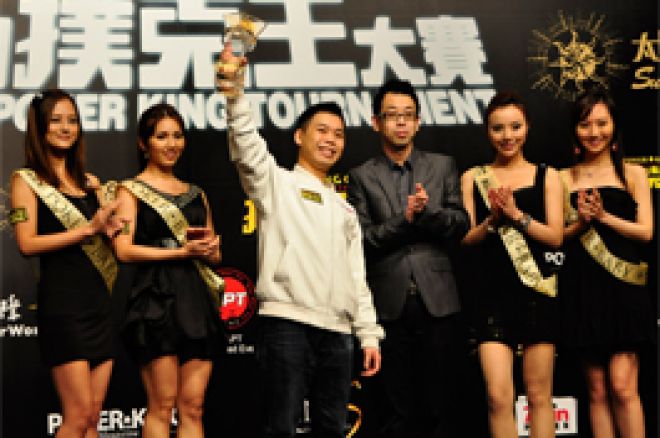 Elton Tsang from Hong Kong outlasted a field of 233 players to become the champion of the Poker King Club’s Asian Poker King Tournament Main Event, held at the Level 8 Ballroom of the StarWorld Hotel and Casino, to take home the first prize of HK$ 553,600.

(Main photo: Elton Tsang, in white, holds up the trophy as he poses along with Poker King Club business director Winfred Yu and the Poker King models.)

On the last hand of the tournament, John Hoang from the USA made it 100,000 to go pre-flop and Tsang called. Tsang checked the flop of

. Tsang checked and after Hoang shoved in the remainder of his shorter stack, Tsang snap-called to show

, well ahead of Hoang's

was a brick, good enough to crown Tsang as the champion of the Asian Poker King Tournament.

Results and pay-outs from the final table:

The last side event, HK$ 1,100 Shootout Event was won by Ricky Foo. Ricky took home the HK$ 14,600 after the third hand of heads up play when he hit an unlikely flush after four suited cards came on the board.