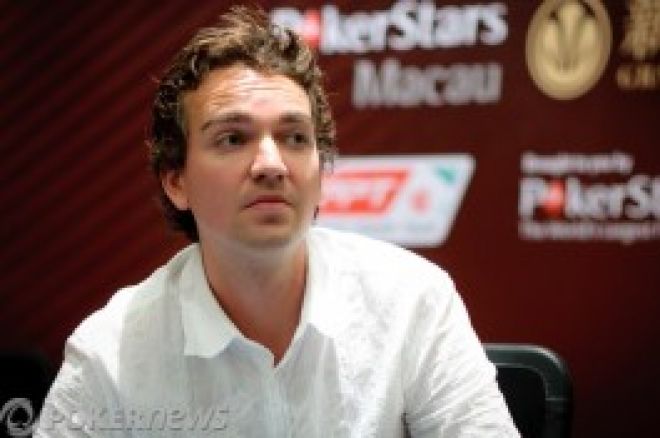 After seven levels of poker during Day 1B of the Asia Pacific Poker Tour (APPT) Macau main event, two Hong Kong residents find themselves at the top of the chip count leaderboard.

A total of 84 players came to play for the day but after seven levels of play, only 36 would make it to the next round.

Leading the way after the second Day 1 flight at the Grand Lisboa is Henrik Gwinner, a Danish pro who now considers Hong Kong his home. Using a silent but methodical approach throughout the day, he slowly accumulated chips before making a huge push near the end of the day after he woke up with aces against an opponent’s pocket jacks. He holds 140,700 in chips heading into Day 2.

Next in line in the chip counts is none other than David Steicke, a familiar face in Asian poker events. Steicke, who was the high-roller champion at the last Asian Poker Tour Macau, was involved in a multitude of big pots all throughout the day. He enters Day 2 with a stack of 124,950.

Some popular pros were in the field for Day 1B but could not hang on to make it to Day 2. The Poker Pack’s J.C. Tran, for instance, never got comfortable and finally had his diminishing stack taken away by another player before the fourth level of play. John “the Razor” Phan and Terrence Chan, two widely respected poker players, also made their exits before the day was over.

Day 1C is expected to be busy as the rest of the field descends onto the Grand Lisboa. Some familiar names who will be playing during the last Day 1 flight are Nam Le, PokerStars pro Bertrand “ElkY” Grospellier, and popular Aussie player Tony Hachem.

This year’s APPT Macau will be held from May 18-23 at the Grand Lisboa’s PokerStars Macau poker room. Buy-in is set at HK $40,000. For more information about the APPT, visit its official web site by clicking here.