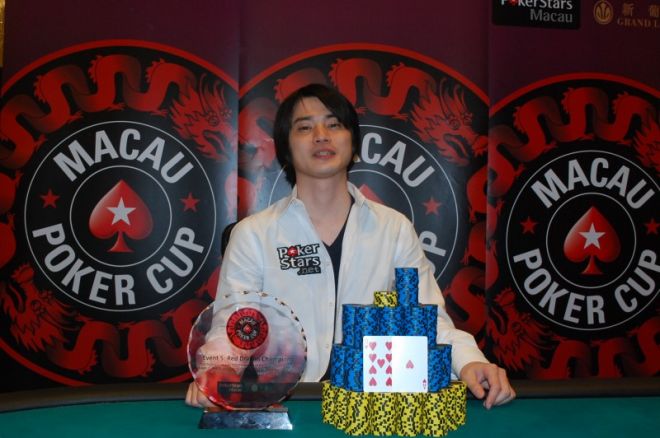 Kenichi Takarabe outlasted a field of 296 players from different parts of the world to become champion of the Macau Poker Cup (MPC) Red Dragon main event.

Takarabe built up his chip stack steadily throughout the tournament and continued his ways at the final table. He struck at exactly the right time as he eliminated Victor Chen and Chen Feng Li on the same hand to give his stack a boost heading into his showdown against Team PokerStars Asia Pro Bryan Huang.

The two started heads-up nearly even in chips but Takarabe took the opportunity and used a steady dose of raises and re-raises to wear down Huang's stack. Finally, on a flop of

, the two got into a raising war and Kenichi ended up declaring that he was all-in. Bryan thought about it and decided to make the call for his tournament life.

for mid pair with top kicker while Bryan had

and had the chance to double up with plenty of available outs. Unfortunately for him, it did not happen as the

landed on the turn and the

came on the river, pushing all the chips Kenichi's way.

For the win, Kenichi took home HK $620,100 in prize money, a sparkling new trophy, and the title of Red Dragon champion. Bryan, meanwhile, missed out on the golden opportunity to add to his list of accomplishments but still went home with HK $424,600 in prize money.

The Red Dragon main event of the Macau Poker Cup was held at the Grand Lisboa Casino's PokerStars Macau ppoker room from July 9 to 11. It featured a HK $2 million prize pool (which ended up at more than HK $2.6 million) and had a buy-in of HK $10,000.

Asia PokerNews was at the event doing live coverage of the Red Dragon from the first shuffle until the last hand was dealt. Read about everything that happened in our live reporting pages by clicking here.

is located at the Grand Lisboa Casino in Macau. For more information, read the Asia PokerNews feature on the poker room by clicking here.