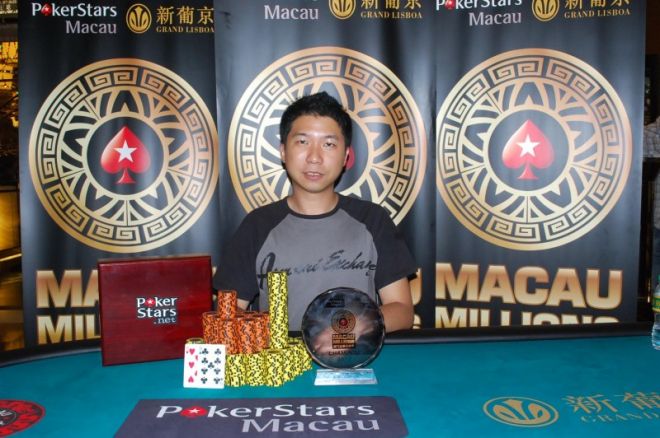 After five days of poker and a record-setting player entry field, Justin Chan emerged to become the champion of the inaugural Macau Millions at PokerStars Macau!

The Hong Kong player, who was playing in just his first-ever live tournament in Asia, outlasted many of Asia's top players in a rarely-seen tournament format to take home the championship and HK $275,000 in prize money.

Chan entered the final day, which saw the remaining 54 players from the five Day 1 heats come together, with 110,000 in chips — just a little below average. However, he stayed aggressive throughout the day, making sure to raise often to steal the blinds and pick chips off players looking to survive.

It worked, as he built up momentum during the second half of the day, eliminating a handful of players before heading into the final table as the chip leader. Eventually, after surviving a long, two-and-a-half hour stretch of three-handed play between Tom Chou,Lei "Alex" Long, and himself, he found himself heads-up with Chou.

Considering how long it took for a player to bust out of the final three, everybody thought that the final two players would take a while to decide the champion. The exact opposite happened, as the two got all-in on the very first hand of their one-on-one match-up.

With a chip stack of 5.8 million compared to Chou's 1.5 million, Chan decided to test his opponent and declared all-in. Chou made the call and the cards were tabled, with Chan showing

. Just like most of the all-in moments during the last few levels of play, this one would be a virtual coin-flip with Chou slightly ahead with king-high.

However, it was Chan's time to shine as the flop came

to give him top pair and leaving Chou with just two more chances to hit a king and survive. It did not happen as the turn and river blanked out, pushing all the chips Chan's way and making him the first-ever Macau Millions winner. Chou, who is a floor manager for the World Series of Poker, won HK $200,000 for his runner-up finish.

A total of 741 entries registered for the Macau Millions, which broke the record for most ever for a tournament in the region and surpassing the guaranteed prize pool of HK $1,000,000. Unlike most of the tournaments held at PokerStars Macau as well as poker rooms in Asia, this one was unique because eliminated players were able to re-enter at any time during the five starting days.

Each starting day played on until the top seven percent for the day was reached. The remaining players then advanced to Day 2, where they were guaranteed to be in the money.

Asia PokerNews was at the Macau Millions doing live updates, chip counts, interviews, and more. To read about what happened during the tournament, visit the live reporting section by clicking here.