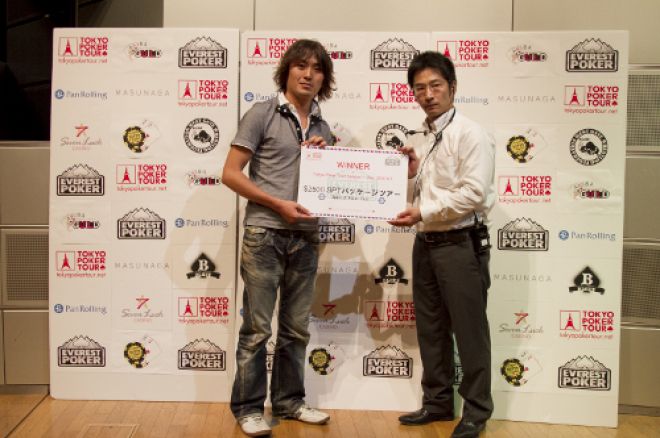 A total of 113 players from all over Japan, including major cities such as Osaka and Tokyo, participated in the event, which was held at the Tokyo Womens Plaza in Omotesando.

It was a long heads-up duel between Koiso and the runner-up, fellow Japanese player Zool. In the end, Koiso and Zool both got their stacks in with Koiso holding

The flop came out

, immediately giving Koiso top pair. The turn blanked with the

only made his hand even better as he improved to top two-pair.

For the win, Koiso won a US $2,500 Spanish Poker Tour (SPT) Package Tour and Everest Poker merchandise. Meanwhile, Zool received a pair of high-end Masunaga sunglasses for his runner-up finish.

Just like the first TPT tournament, the event was filled with plenty of highlights. Japanese comedian and wrestling personality Antonio Koinoki entered to the sounds of his theme song to kick off the event and he invited all the players to join him in shouting “shuffle up and deal!”

In addition,Tokio, the thirteen-year-old son of TPT tournament director and promoter Itaru Kaneko, made another appearance as a dealer, much to the delight of the crowd.

The next TPT tournament will be held tomorrow, August 14, at the Tokyo Womens Plaza. Japanese celebrityKoriki Choshu will be on hand to play in the event. The winner of that tournament will receive a 7 Luck Casino package for two.