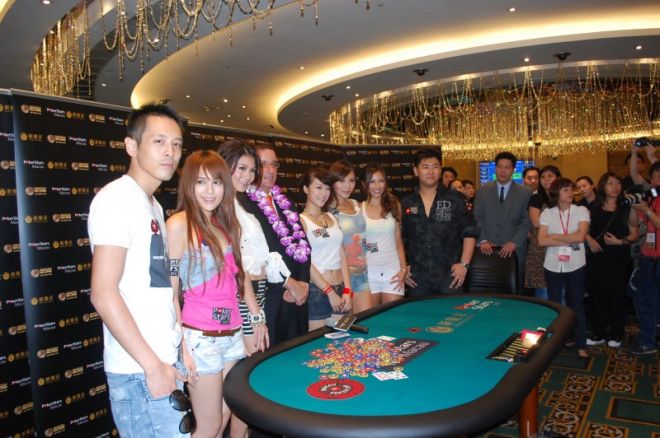 The much awaited Macau Millions at the Grand Lisboa’s PokerStars Macau kicked off with a bang today as the poker room officially marked the start of the tournament with a glamorous opening ceremony.

A large throng of onlookers and media personnel crowded the stage to try to catch a glimpse of the celebrities, giving the event a red-carpet feeling.

Of course, the main focus was the ground-breaking Macau Millions main event, which is looking to break the region’s record for entries in a tournament.

Want to follow the action live? Get live blogs, chip counts, photos, and more straight from the Macau Millions by clicking here!

PokerStars Team Asia Pros Bryan Huang, Celina Lin, and Raymond Wu were on hand to mark the opening of the event, and each will be looking to win the event to help their bids to win the Asian Player of the Year at PokerStars Macau.

"The Asia Player of the Year race will be prominent as both the Macau Millions and $5,000 NLH 350K Guarantee event (August 7-8) will count towards the APOY Leaderboard," said Mr. Leung.

A big HK $1,000,000 guaranteed prize pool will be up for grabs with a buy-in of only HK $2,200. Unlike most of the tournaments held at PokerStars Macau, this one will be unique because eliminated players will be able to re-enter at any time during the five starting days.

The schedule is made up of Days 1A to 1E. The starting days will then be followed by Day 2, where the winner will ultimately be decided.

Each starting day will play on until the top 7 percent for the day is reached. The remaining players will then advance to Day 2, where they are guaranteed to be in the money.