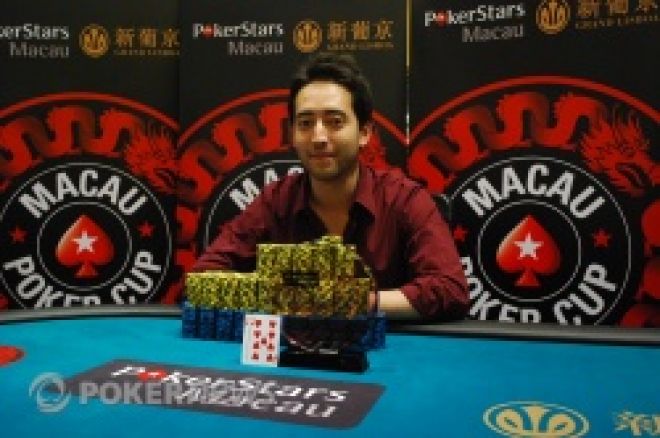 Three-hundred and fourteen hopefuls and one survivor. The PokerStars Macau Poker Cup Red Dragon Main Event ended just a few hours ago and crowned its champion at the Casino Grand Lisboa in Macau.
After three days and about 29 hours of poker action James McCarty came out on top of the field as he held off all challengers in the premiere poker series event in Asia.

With a guarantee of HKD$ 2,000,000 prize pool (approximately USD $ 258,000) this edition of the MPC Red Dragon Main Event saw records broken left and right. The Red Dragon Main Event has grown by leaps and bounds since it moved to the Casino Grand Lisboa. The number of entrants doubled from 57 at the end of 2008 to 112 in March of 2009. In July early this, the number rose to 294.

The Rise of the Underdogs

In Day 1A of the tournament, unheralded Jason Coe from the United States was the chip leader. Interestingly, another unknown player in Rathi Shashank from Hong Kong was on top after Day 1B. Day 2 saw yet another new face stack the most chips as Wai Chen “Ginger” Keong, a local from Macau was the big stack bully going into Day 3.

While the rise of the underdogs was a delight to watch, the fall of stars was somewhat of a surprise. Victims of Day 1A included Celina Lin, Raymond Wu and J.C. Tran while Day 2 saw Bryan Huang, Tae Joon Noh, Nam Le, Quin Do, Neil Arce and Kenichi Takarabe bust out.

The fiinal table starred new faces. Joining McCarty, Shashank and Keong in the final ten were; Wai Kin Wong and Fan Liu from China, Sachin Daswani from Singapore, Makoto Yoshimichi and Masashi Minowa from Japan and Michael Mariakis and Dean Holt from Australia.

After an interesting twist to the tournament when the final three players decided to split their cash winnings a couple of hours before the final table ended, the Japan-based American McCarty survived a heads-up showdown against Keong, who had

with the winning hand of

failed to help Keong as McCarty ran away with his first-ever major international title.

Later this year, PokerStars Macau at Casino Grand Lisboa will once again host the Macau Poker Cup Championship (MPCC) scheduled on November 2 to 7. The MPCC is the culmination of the Macau Poker Cup series and will offer a HKD $3.5M Guarantee with the buy set at HKD $20,000.