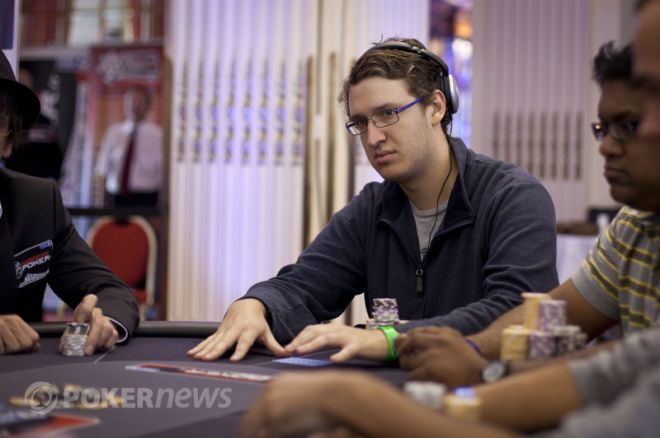 At the end of Day 3 of the 2011 World Series of Poker Europe Main Event, 25 players remained. The tournament team set a very optimistic challenge on Tuesday — to reduce the playing field from 116 to 16 by the end of the day, and as play crept into the early hours of the morning, it was decided to stop the day at the end of Level 19 with 25 players remaining.

As play entered the final level, the race for the chip leader spot was a spectacle to behold. It centered on two players from the UK — Max Silver and Chris Moorman. Until both bags were packed and sealed, it was unknown who was ahead. Silver controlled the chip lead by a difference of 11 chips!

In September of last year, Max Silver became a well-known name on the European poker scene after winning the UKIPT in Dublin and then winning a side event at EPT London. Fast forward 12 months and Silver had not cashed in one single live event, but as he rolled into his favorite month, it all began to change. He finished 28th at the WPT Grand Prix de Paris, fourth at UKIPT Dublin, and then fourth in the WSOPE Event #4 €3,200 Shootout a few days ago.

To top off a fantastic few months Silver finished 11 chips ahead of his nearest rival with 1,780,000 chips. The pivotal point in the tournament for Silver came with the exit of another countryman. Mathew Frankland was coasting through the day when he ran into Silver’s stack in a flush-over-flush confrontation. Frankland hit the rail and Silver’s confidence hit an all-time high. From that moment on, Silver’s stack just continued to grow at the same rate as the beanstalk that a kid called Jack once planted.

Chris Moorman spray painted his name all over the poker world when he received notoriety for his performances in cyber space. But just recently, Moorman has been showing the world that he also knows the way into a live card room, and boy when that lad turns up, can he play! In January Moorman finished in seventh place at the Aussie Millions Main Event before having a crazy summer in Las Vegas, winning over $1 million at the WSOP. The last time he cashed in a live event on European soil was at the WSOPE in 2010 and he has just done it again, only this time he might just go all of the way.

It all started going right for Moorman when he was seated at the same table as the two chip leaders at the time, Constant Rijkenberg and Melanie Weisner. The critical turning point centered around a hand between Moorman and Rijkenberg that was played on the bubble. Moorman raised to 12,000 in the hijack and Rijkenberg defended his big blind. The flop was

and Rijkenberg check-called a 114,000 Moorman bet. The final card was the

and Rijkenberg checked again. Everyone in the room was staring at Moorman as he moved all-in for 229,000 and incredibly could have been the bubble boy. Rijkenberg made the call and Moorman showed pocket queens for his three streets of value and a sick looking Rijkenberg was left nursing his broken stack. Moorman was then moved to the feature table, which was being live streamed, and he ran amok. He eliminated Hoyt Corkins, Freddy Deeb, Carbone Damiano and Melanie Weisner.

Moorman exchanged a potential bubble spot for one of the top spots, so who was the unfortunate bubble boy? It turned out to be Barry Greenstein, and he told us that his own girlfriend had predicted his bubble position via a text message. Brian Roberts now has a signed copy of Ace On The River for eliminating Greenstein in 65th place.

Day 4 will begin at 1400 CET (0500 PDT) and will end when the final table is reached. The PokerNews Live Reporting Blog will have the play-by-play of all the action.