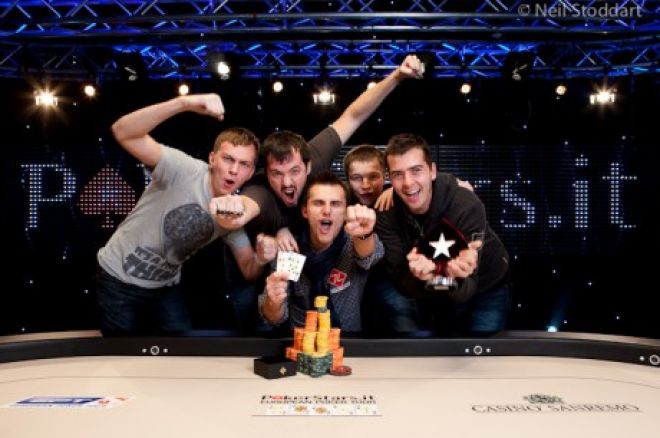 Thursday was the closing day of the PokerStars.it European Poker Tour San Remo Main Event, and it was truly an international affair. The eight finalists arrived at the table from eight different nations, each battling to bring €800,000 and an EPT trophy back to their respective countries. On what is traditionally a short day, it took a bit longer than expected to crown the champion, Russia's Andrey Pateychuk, who was left holding the hardware and posing for his winner photos at the end of the night. But to say simply that he won doesn't do proper justice to the spectacular hand that put the trophy in his hand after nine hours of play.

When the action kicked off at 1400 CET (0500 PDT), there was still a glimmer of hope that the EPT would crown a double Main Event champion this week in Italy. Kevin MacPhee won the Berlin Main Event in Season 6 and a lot of knowledgeable people peg him as one the favorites to claim a second EPT trophy. He began the day at the bottom of the totem pole, though, and the hopes of him winning began to bleed away just as his chip stack did.

MacPhee was unable to get into any of the first 34 pots of the day, and on hand No. 35, he was eliminated. The table folded around to MacPhee in the small blind holding

. He moved all-in, and Barny Boatman, in the big blind, made the call with

. MacPhee was not at all thrilled with the call, and even less happy with

the board that ended his run in eighth place. EPT title number two will have to wait, for now.

Next to fall was the last Italian left in the field, Rocco Palumbo. At that point, he was riding a dangerously short stack and seemed content to flip for double or nothing with

. Bendik found a set on the flop, however, and a blank on the turn left Palumbo drawing dead to seal his elimination and reduce the field to a six-max.

Start-of-day chip leader Daniel Neilson had been playing the role of table captain with almost half the chips in play, but things began to unravel in the middle stages of the day. His slide left room for a challenge atop the pack, and Dimitar Danchev did most of the work with six players left. Mounting his charge, he was responsible for the elimination of France's Yorane Kerignard in sixth place. It was another coin flip, and Kerignard's

kept his trips safe. Kerignard was out, and suddenly, Danchev was nipping at the heels of the chip leader.

Neilson was reeling after a few dropped pots, and Danchev was gunning for his chips, but Pateychuk who took the biggest bite out of Neilson's stack. In what was the beginning of the end for Neilson, he five-bet shoved with

, and the Russian snapped him off with

. When the board came

, Pateychuk vaulted himself into the lead and smashed Neilson back down into the pack with about 3 million chips.

From there, Pateychuk didn't look back. Bendik fell next in fifth place when his

, and Boatman was yanked off the stage soon thereafter. The Brit had a frustrating day on the final table and ended up committing his shortening stack with

. Once again, Pateychuk woke up with a real hand, and his

was never in jeopardy as the board ran out

to send Boatman off in fourth place.

Danchev and Pateychuk spent a bit of time battling during three-handed play, but it was clear that they were after Neilson's stack, which was getting awfully short by that time. Once again, Neilson got his money in with a dominated ace —

— and Danchev found the hand to knock him out. His

held on the board full of blanks, and that left both players close to even in chips as the heads-up duel began. As such, they decided to take €1.2 million off the table and split it, playing one-on-one for the remaining €80,000 and the title of EPT San Remo champion.

The Bulgarian poker world was on the edge of their seats as they had hopes of crowning their first EPT champion, and Danchev did good work as the night progressed. While Pateychuk was winning the most pots, Danchev was winning the big ones, and once he got through the first hour of heads-up play, the momentum seemed to real move in his direction. He even managed to squeak into the chip lead for a few hands. In fact, he was one card away from the title at one point, but the stars were aligned for Pateychuk in San Remo.

It was a hand we'll see replayed over and over again on the EPT broadcasts, and it was the one that crushed the hopes of Danchev and Bulgaria. The stacks were almost dead even at that point, but one could feel a big pot working itself up in the preceding hands. Then came the hammer.

flop. Danchev raised just more than the minimum, and Pateychuk shoved with

! The call came instantly, and Danchev's

had him two cards from the title. The turn

gave him a sweat he hated, and the poker gods struck him down on the river. The

dropped like a bolt of lightning, and the players could only stare at each other with wide eyes, unable to really process what had just taken place.

Drawing to runner-runner and getting there, Pateychuk had all but sealed the deal. He only needed three more small hands to finish off Danchev, and the Bulgarian did a good job hiding his disappointment until he was alone at the payout desk a few minutes later.

It's better to be lucky than good, and Andrey Pateychuk has a full measure of both qualities. After putting on a clinic in power poker for a few hours, he needed lady luck to bring it home for him, and we certainly won't begrudge him that. For his efforts this week in San Remo, he earned €680,000 and Russia's second European Poker Tour title.