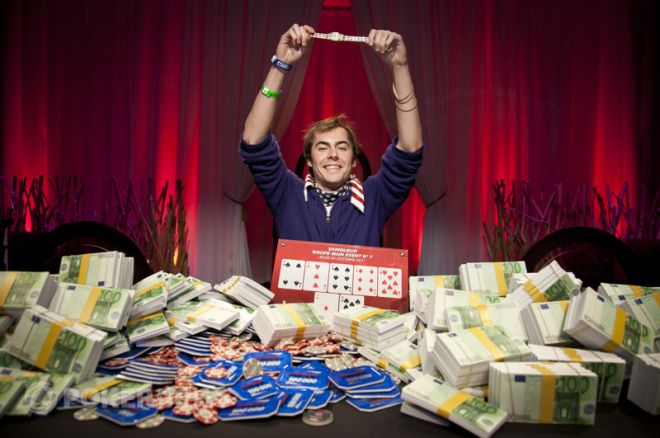 The 2011 World Series of Poker Europe has concluded with the €10,400 Main Event Championship. It was an absolutely amazing series capped off with a victory by Elio Fox in the Main Event. For his win, Fox earned the massive €1,400,000 first-place prize.

On Saturday, Oct. 15, this prestigious event kicked off with 310 players entering on Day 1a. On Day 1b, 283 players joined the mix to take the grand total of entrants all the way up to 593, easily making it the largest WSOP Europe Main Event in history.

The large field generated a prize pool of €5,692,800 and the top 64 places were paid out. The eight players to make the final table would have a chance at €3,890,000 of that prize pool and coming into the final day, Elio Fox was the boss of the bunch.

The first player eliminated on the day was Britain's Max Silver. During Level 24 with the blinds 15,000/30,000/5,000, fellow countryman Chris Moorman raised to 60,000. Silver three-bet to 165,000 and then Moorman requested a count on Silver's stack. After the count was received, Moorman four-bet to 365,000. He was met with a shove from Silver and quickly called.

and was flipping with Silver's

, but was behind Cody's

. No worries were in order for Fox though, as he was in familiar position. On Day 4, he took a massive pot to eliminate two players after coming from behind with pocket tens. A very similar thing happened here as the board ran out

and Fox made a come-from-behind straight to send Cody out the door. For his finish, Cody took home €150,000.

Shawn Buchanan was next to head home, but did very well for himself all day long to get right back into the competition after beginning the day on the short stack. Much like Cody, Buchanan got his money in good, but the poker gods had other things in mind.

was up against Buchanan's

and Blain added a world of outs. He could now hit a diamond for a flush or a five for a wheel along with his overcard ace. The turn brought the

and, for a few moments, everyone felt Buchanan was going to hold tough and fade this huge draw for Blain, but when the

landed on the river it was all over.

Blain opened to 175,000 and Roberts three-bet to 350,000 from the small blind. Blain came back over the top with a four-bet shove for 1.76 million. After several long minutes in the tank, Roberts called holding

. He was proven correct when Blain turned up a worse

and was on the brink of elimination.

The flop paired both players when the

fell. That was followed by the

to finish things off and end the tournament for Blain, who took home €275,000 for his efforts.

Roberts was the next to go after losing a lot of chips in some key hands to both Moorman and Fox. Down to under one million in the same level in which he busted Blain, Roberts called all-in with

For a minute, everyone thought Roberts was going to put himself back into the swing of things when the flop came down

. It became even more of a reality after the

landed on the turn and kept Roberts in front. Unfortunately, the

hit on the river, and Moorman made a straight to the eight. Roberts said his goodbyes and walked away with €400,000 in prize money.

Germany's Moritz Kranich was in line to become the second German player to win a WSOP Europe gold bracelet behind Thomas Bihl and could also earn poker's Triple Crown if he were to win this event. That run ended in third place, though, when Fox sent him packing.

Fox min-raised on the button to 160,000 and Kranich reraised all-in from the small blind for approximately 1.6 million. Action got back to Fox who made the quick call, tabling the

and gave Kranich a lot more hope than expected. The

on the turn didn't change anything, nor did the

on the river. All Kranich could muster was a pair of fours, which weren't good enough to beat Fox's nines. He was eliminated in third place and earned €550,000.

The heads-up battle for the title came down to American Elio Fox and Brit Chris Moorman. When the match began, Fox held the lead with 11.095 million in chips to 6.72 million. There was a difference of €600,000 in prize money up for grabs, but also a bit more than that at stake.

Moorman was fighting for a chance to become number one on the WSOP Player-of-the-Year leaderboard. He had to win this event to take over the top spot, but only one man stood in his way.

Also sweating the duel was 2010 champion James Bord. Leading up to the Main Event in Cannes, Bord said, "I don't think an American can win the bracelet; Europeans are now far superior. We used to look up to the U.S. players back in the day, but those days are now long gone. I'm prepared to put my money where my mouth is and refund any losing bets up €500 if an American wins."

What Bord was talking about was that if you made a bet on Matchbook.com and an American won the Main Event, Bord would refund your bet up to €500.

About 20 hands into heads-up play, Fox took a big chunk from Moorman's stack. Fox had the button and he raised to 200,000. Moorman called. The flop came

The turn was the interesting

and Moorman kept up his momentum with a bet of 950,000. Fox remained seemingly unfazed with his fists clenched tightly underneath his mouth; he grabbed for chips and made the call.

The river was the even more interesting

and Moorman pulled back on the brake a little bit with a check. Action moved to Fox and he also checked. Fox showed

for the tiniest of flushes and Moorman mucked his hand. From there, Fox kept the pressure on Moorman leading up until the final hand of the tournament.

and was dominated by Fox's

The flop was interesting with the

falling. The turn brought the

and gave Moorman some outs to a chop. When the river landed with the

With Fox winning the bracelet, Bord must pay up to everyone who made bets, and Ben Lamb has locked up the WSOP Player of the Year no matter where he finishes at the WSOP Main Event final table.

That wraps up PokerNews coverage from Cannes, France for this amazing series, but the WSOP still has one more event to finish off for 2011. Join us in a couple of weeks for the WSOP Main Event November Nine live from Las Vegas, Nevada. We'll see you there!