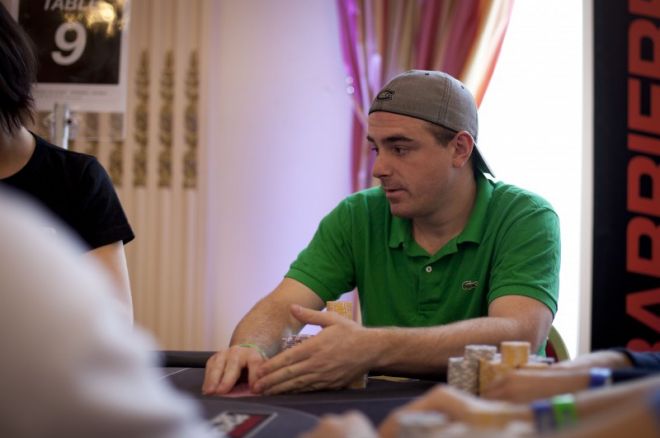 Day 3 of the 2011 PokerStars.it European Poker Tour San Remo wrapped up on Monday after a short day. The remaining field of 144 was cut down to 64 and they'll be returning for Day 4 on Tuesday. The man leading the charge with 1.202 million in chips, is Chris McClung.

With 144 players returning and the money line set at 128, it didn't take long for the bubble to burst. Before we tell you about how the bubble broke, we have to recap a massive hand that occurred between Kevin MacPhee and William Thorson.

While Thorson was tanking preflop, facing the six-bet, the tournament director came over the microphone and instructed all tables to complete the hand they were on and hold up. That meant the tournament was on the bubble and this massive pot could cause the bubble to break. After a couple of minutes, Thorson flat-called the six-bet and the two went to the flop.

and MacPhee immediately moved all-in for 161,500 in chips. Thorson tanked while media, players and tournament staff all swarmed the table. None of the commotion stirred Thorson as he sat in the tank. Finally, Thorson elected to fold and MacPhee won the pot. Neither player showed.

After the hand, MacPhee (@KevinMacPhee) mentioned on Twitter, "I had Rodney and Martin Luther," which could only mean he had two kings.

After a few more all-ins that didn't eliminate anyone, Christian Troger saw his tournament life fade thanks to McClung's kings.

flop, McClung bet 13,000 before Troger raised to 26,000. McClung reraised to put him all-in and Troger called to put his tournament life on the line. Troger held

. The turn was the

, eliminating Troger from the tournament in 129th place and bursting the bubble.

At the start of the day, Joseph Cheong held the chip lead. He had a wild up-and-down day just like the day before and wound up finishing with 833,000. In one of the more key hands he played on Monday, Cheong sent Thorson to the rail.

board and Cheong moved all-in. Thorson tanked for a bit and then made the call for his last 200,000 or so. Cheong tabled

for a straight and Thorson mucked his hand before heading out the door.
,
Team PokerStars Pro was represented by Vanessa Selbst, Lex Veldhuis, John Duthie and Johnny Lodden on Day 3. Team Online player Luca Moschitta was also in the mix. All five advanced to Day 4 and are still in contention for the title.

The 2011 World Series of Poker Europe Main Event champion Elio Fox also made it through the day. He finished with 652,000 and continues his very hot October.

Some of the notables to bust on Day 3 included Toby Lewis, Taylor Paur, Steve O'Dwyer and Kyle Johnson.

Day 4 will take place Tuesday at 1400 CET (0500 PDT) in San Remo, Italy, as the quest continues. Be sure to stay tuned to PokerNews for all of the live coverage straight from our live reporting pages.