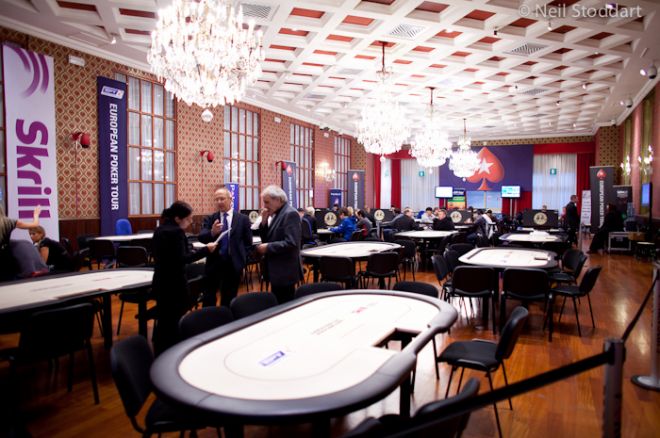 Day 4 was a short one at the PokerStars.it European Poker Tour San Remo. It only took about seven hours to shrink the field from 64 players to 24. Canada's Chris McClung came into the day atop the pack, and his lead only continued to balloon over the course of the four levels. At the end of the night, he had 3.148 million chips in his bag, and that was good enough to give him more than 150 big blinds and a lead of about a million chips over his nearest challenger. With 837 players in the starting field, McClung holds about one eighth of the 25 million chips in play.

Joseph Cheong was within striking distance of McClung to start play, and he enjoyed a good increase over the first few levels. Very late in the day, though, Cheong was demolished and his chips were absorbed by McClung in a huge pot. In the 3k/10k/20k level, McClung three-bet a raise from Mustapha Kanit, and Cheong made a cold four-bet to 220,000. Kanit folded, but McClung went ahead and shoved all-in for about a million.

had been picked off. Cheong rolled over

, and he was a huge favorite to drag the big double up and the chip-leading pot. But the dealer provided the kiss of death. The board fell

, and the flush on the turn sealed Cheong's demise during the last level of the night.

Also falling short of very deep runs were two of the four Team PokerStars Pros who had made Day 4. Vanessa Selbst was the first of the crew to be sent off. She was unable to get anything going with her middling stack, and she ended up more-or-less committing herself with

on queen-high board. Alessio Isaia's

had turned two pair, and that was the end of the line for one of the last remaining ladies in the field. Shortly thereafter, John Duthie, founder and creator of the EPT, was eliminated with

. He was short when he shoved preflop, and Christopher Williamsson found

to tally the knockout on a

That leaves Lex Veldhuis and Johnny Lodden to carry the torch for the Team, and both men had productive sessions on the felt.

Their advance came despite the fact that they were seated next to each other for the bulk of the day, and poker fans are hoping they'll keep on sharing space all the way into the final table. Lodden managed to double with kings against Cheong's ace-king around dinner time on Day 4, and he bagged up 1.227 million chips to end the day. On his left, Veldhuis seemed to be pacing himself against the active table, and after not much chip movement, he finished with 877,000.

Other notables still in the mix include Barny Boatman, Kevin MacPhee, Mike McDonald, Alessio Isaia, and the new WSOPE Main Event champion, Elio Fox. It's quite a lineup with just 24 players left, and there are still a couple of former champions (MacPhee, McDonald) with a shot at becoming the EPT's first double Main Event champion. They and the rest of the 24 will return to the Casino di San Remo at 1400 CET (0500 PDT) on Wedesday to play down to the final table.

Don't forget to tune into the Live Reporting page on Wednesday to follow along with the action. And speaking of following things, our Twitter stream is the best place for up-to-the-minute poker news right in your timeline.