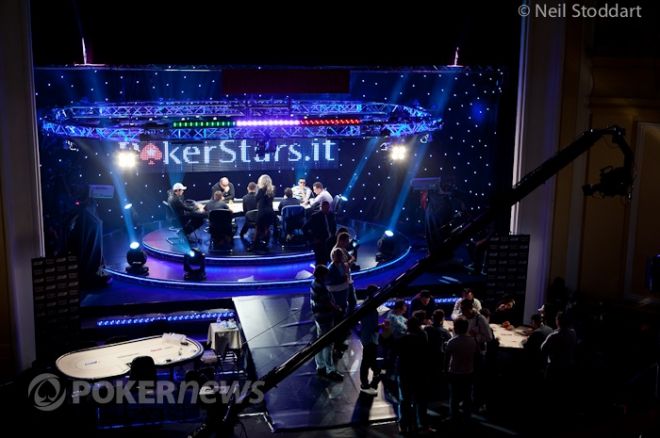 The final table was set on Wednesday night for the 2011 PokerStars.it European Poker Tour San Remo, Italy. It was another short day as the field of 24 players got down to eight in very little time.

At the end of the day, Australian Daniel Neilson led the way with 6.7 million in chips. He quietly chipped up throughout the day before ending the night by sending Team PokerStars Pro Johnny Lodden home in ninth place. Neilson has been on a nice run in Europe recently. A few weeks ago, he placed 45th in the EPT London Main Event for £13,000 and is now set to make a lot more cash as he eyes the €800,000 top prize.

When the day began, Chris McClung had the lead with 3.148 million. Instead of writing about how he ran over the field, all we can do is wonder where all his chips went. McClung, with his ultra-aggressive style, had his foot on the gas all day. In fact, it seemed like he never slowed down from the start of play on Day 1. On Wednesday, that style seemed to get the best of him. It allowed him to grant numerous double-ups to his opponents before he was eliminated in 14th place.

One of the players McClung doubled was Kevin MacPhee. MacPhee was all-in before the flop for 1.742 million, and he was tangling with McClung. MacPhee showed

and McClung turned over

flop reversed the outs for the two men, and now McClung was looking for one of MacPhee's kings to make Broadway. The turn

was a blank, though, and the river

Although that hand described above did give MacPhee the lead, he went on to lose a big one against Dimitar Danchev. MacPhee raised to 110,000 from under the gun with the blinds at 25K/50K/5K and Danchev called from the cutoff seat to see the flop come down

landed on the turn, but MacPhee didn't slow down. He fired a bet of 275,000. Danchev stuck right with him and made the call. The river paired the board with the

and MacPhee bet 460,000 rather quickly. Danchev double-handed a raise to 1.2 million. Only a few seconds passed before MacPhee announced a call.

for a full house, queens full of aces. MacPhee sprung from his chair and slammed over the

for a straight that was no longer good, losing about half of his chips in the hand.

MacPhee will enter the final table with 1.115 million in chips and has a shot at becoming the first two-time EPT champion. In 2010, MacPhee won EPT Berlin. His work will be cut out for him on Thursday, however, after he finished the day dead last in chips.

Everyone left has locked up at least €63,694, but there's still plenty more to play for. The title and first-place prize of €800,000 still hangs in the balance, so be sure to stay tuned to PokerNews for all of the live coverage starting Thursday at 1400 CET (0500 PDT).

Don't forget to tune into the Live Reporting page on Wednesday to follow along with the action. And speaking of following things, our Twitter stream is the best place for up-to-the-minute poker news right in your timeline.