2011 PokerStars.net APPT Macau Day 1a: Phil Ivey Is Back 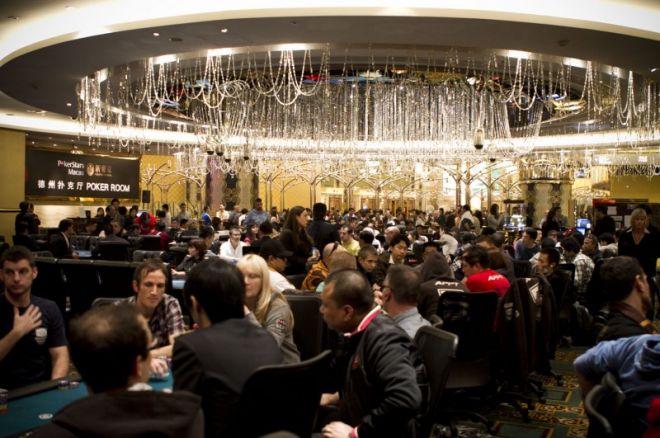 The first day of play at the 2011 PokerStars.net Asia Pacific Poker Tour Macau Main Event completed on Wednesday. Eight, 60-minute levels were played on Day 1a and a total of 269 players. Heading the pack at the end of the day was Shih-Chieh Su with 171,800 in chips.

Overshadowing the big story of the kickoff of this amazing event was the return of Phil Ivey. Rumors circulated recently about Ivey being in Macau. Those rumors turned into more rumors when it was mentioned that he'd be playing this very event. The rumors then turned to truths when Ivey showed up and took his seat during Level 2.

Ivey was quiet during the day as far as verbal volume goes, but his chip stack proved to be quite noisy during the day. He played plenty of pots and his stack was all the way up to around 95,000 at one point, coming from the following hand.

landed on the turn and both players opted to check. The

on the river prompted Ivey's opponent to bet, throwing out 7,300 and leaving around 20,000 behind.

Ivey studied his opponent before tumbling a stack of 5,000 denomination chips onto the felt. It was more than enough to cover his opponent, who went into the tank before sending his cards into the muck. Even though that pot moved Ivey to nearly six figures, he only went on to finish with 51,200 in chips, but it was good enough to move on to Day 2.

Other notables coming out to play on Day 1a were Grant Levy, Julian Powell, David Steicke, Jackson Zheng and Team PokerStars Pros Raymond Wu, Alex Kravchenko and Mickey Petersen. They'll all be moving on to Day 2.

Mark Vos, Emanuel "Curly" Seal, Andrew Hinrichsen, Jonathan Karamalikis, Michael Pedley and Ori Miller were just some of the players who failed to make it through Day 1a.

Day 1b will kick off on Thursday at 1200 CST (Wednesday, 2000 PDT). The beautiful Grand Lisboa and PokerStars Macau will be the host once again as an expected field of 300 or so players will be out in full force. Be sure to come right back to PokerNews for all of the live reporting from the felt.