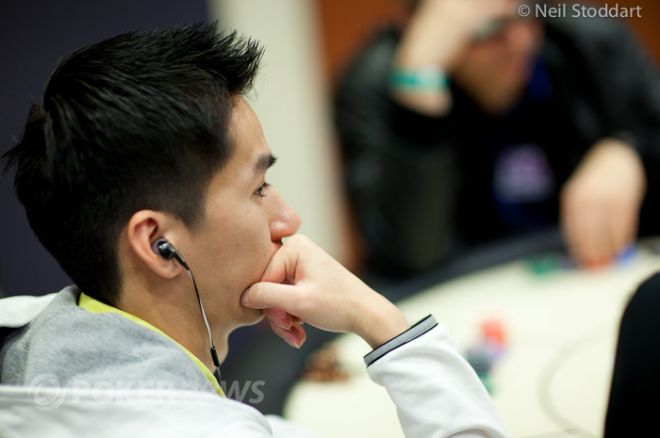 Day 3 has come to an end at the PokerStars.net Asia Pacific Poker Tour Macau Main Event and what an eventful day it was. When the day began, 96 players were in contention, but by the end of the day, only 15 remained. Of those players, India's Sangeeth Mohan will start Day 4 with the chip lead.

Coming into Day 3, Nathaniel Seet had the most chips, holding a staggering lead over Dan Park who was second in chips. Seet and Park did not hold on to their chips all day however, and were eliminated in 38th and 28th respectively.

Seet and Park may have been lucky enough to finish in the money, but it wasn't the same story for Team PokerStars Pro Nacho Barbero. The demise of Barbero came after several brutal hands, which left him with only 5,000 in chips. Barbero's last chips were sent into the middle holding

. No help came for Barbero and he was sent to the rail.

Of course, what everyone wants to know is who is still in contention for the title. Mohan will return on Day 4 with the chip lead, bagging up a huge 2,425,000. Mohan is on a bit of hot streak at the moment, having taken down an Asian Poker Tour event in Goa, India, just a few weeks ago.

Also returning for Day 4 is Team PokerStars Online's Randy Lew. The player well known as online super-grinder "nanonoko" will start the final day of play with 845,000 in chips.

Also taking the felt on Lew's table will be David Steicke, who had somewhat of a roller coaster day, seeing his stack ebb and flow from being the chip leader several times, to at one point having a short stack. In the end Steicke bagged up a healthy 886,000.

On the one other remaining table will be prominent Australian players Jeff Rossiter and Josh Barrett. Rossiter and Barrett will both return with seven-figure stacks and are in contention to take an APPT title to the shores of Australia.

See below for the full final day table draw:

The 15 remaining players are guaranteed at least HKD$124,000, however it is the HKD$3,772,000 that all the players are gunning for. The prize equates to almost US$500,000 and the top five players will be set to earn at least six-figures. Below is a list of the final table payouts, with the approximate equivalent in USD.

Be sure to join the PokerNews Live Reporting Team at 1200 CST Monday (Sunday, 2000 PDT) as they bring all the action on the way to crowning the newest APPT champion in Macau!