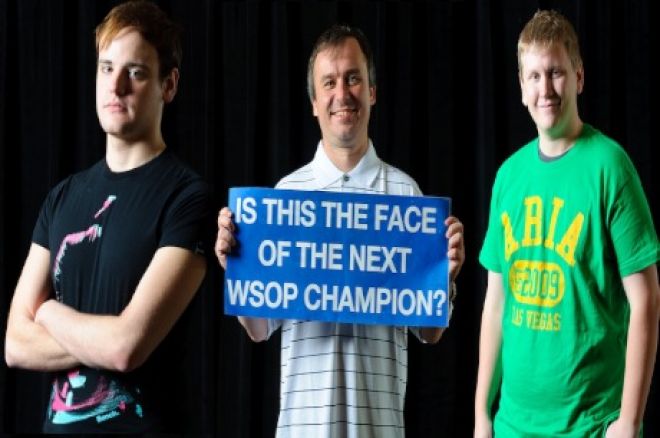 The biggest spectacle in poker, the World Series of Poker November Nine never disappoints, and Sunday was no exception. After a four-month hiatus, the final nine players of the 2011 World Series of Poker Main Event converged on the Penn and Teller Theater in the hopes of making it to Tuesday — to be part of the final three. Pius Heinz, Ben Lamb, and Martin Staszko have kept the dream alive and are still in the hunt for the coveted bracelet.

The first elimination of the day came on the 51st hand of the day. Ben Lamb raised to 1.7 million from under the gun. Action folded to Sam Holden in the small blind and he reraised all-in for 11.125 million. Lamb made the call and turned over

was dominated. The flop fell

giving Lamb top pair and a flush draw. The

on the turn left Holden drawing dead, sending him to the rail in ninth place, good for $782,115.

Shortly thereafter, Anton Makiievskyi was eliminated in eighth place. On the 59th hand of play, action folded around to Makiievskyi, who was in the small blind. He open-shoved for 10.5 million and was called by Pius Heinz in the big blind. Makiievskyi, holding

was flipping for his tournament life against Heinz's nines. The flop came down

pairing Makiievskyi's king and putting him in the lead. The turn changed everything however, when the

fell, giving Heinz a full house. The river brought the

, officially sealing Makiievskyi's fate in eighth place. He pocketed just over $1 million for his efforts.

Heinz had a commanding chip lead after his elimination of Makiievskyi and it only continued to grow throughout the day's action. The third elimination of the day came when Martin Staszko raised to 1.7 million and a short-stacked Bob Bounahra reraised all in for 4.475 million. Staszko, who tabled

and stayed that way as the board ran out

. Bounahra was sent to the rail in seventh place, good for $1,314,097, and his raucous Belizean contingent followed him out of the Penn and Teller Theater.

Phil Collins, who by the 73rd hand of play, had fallen to the second shortest stack at the table moved all-in from the button for 13.575 million. He was called by Ben Lamb, who was in the big blind, holding

. Collins was way behind with

flop kept Lamb in the lead, but Collins had flopped a backdoor flush draw. The

on the turn gave Collins a huge sweat, with a flush draw and an open-ended straight draw. The river kept Collins in the game when the

appeared, doubling his chip stack to over 28 million, and sending his rail into boisterous cheers.

Twenty-four hands later, Eoghan O'Dea was crippled in a huge hand against Lamb. Only about two million in chips separated the two when the chips went in the middle preflop. Lamb was at risk and O'Dea was in the lead with

kept O'Dea in the lead, as did the

on the turn. The river dealt the crushing blow — the

, against Martin Staszko, who turned over pocket eights. The

On the very next hand, the field was reduced to four. Pius Heinz raised to 2.1 million from under the gun. Action folded to Phil Collins who moved all-in for 18.3 million. Heinz made the call, and Collins' tournament life was on the line. Heinz held

and was ahead of Collins'

flop gave Collins an open-ended straight draw, but Heinz was still in the lead, and stayed there through the

turn. Heinz turned a set, and Collins added more outs to his range. The

on the river eliminated Collins in fifth place, $2,269,599, and added even more chips to Heinz's stack.

Play slowed considerably after the dinner break, but only one thing remained constant — Pius Heinz at the top of the leaderboard. However, on hand No. 156, Heinz gave away a few of his chips when he doubled up Martin Staszko. In the hand, Staszko moved all-in over the top of a raise from Heinz, who was under the gun. Heinz made the call and tabled

gave Staszko trips, and he stayed in the lead through the

river, doubling to 44 million, and leaving Ben Lamb as the short stack.

Lamb was in need of some help to keep his tournament dreams alive, and he ended up getting some, at the expense of Matt Giannetti. On hand No. 174, Giannetti raised to 2.6 million from the button. Lamb reraised all-in from the big blind and Giannetti called the 26.8 million more. Giannetti and his pocket jacks had Lamb, who tabled

on the ropes. The flop fell

, brought Lamb's flush and the river was the meaningless

. Lamb doubled to 55 million, and Giannetti was crippled.

Giannetti doubled on the next hand, against Staszko, but he didn't hold on to those chips for long. Giannetti and Lamb tangled again, but Lamb held the best of it, and Giannetti couldn't get his pay back. The chips went in the middle preflop on hand No. 178, with Lamb holding kings and Giannetti tabling

. The flop sealed Giannetti's fate when it fell

His elimination set the stage for Tuesday when the final three players, Lamb, Heinz, and Staszko, will play for poker immortality.

Play gets under way Tuesday at 1730 PST (0130 GMT) and the PokerNews Live Reporting Team will be on hand to provide hand-for-hand coverage until a winner is crowned.