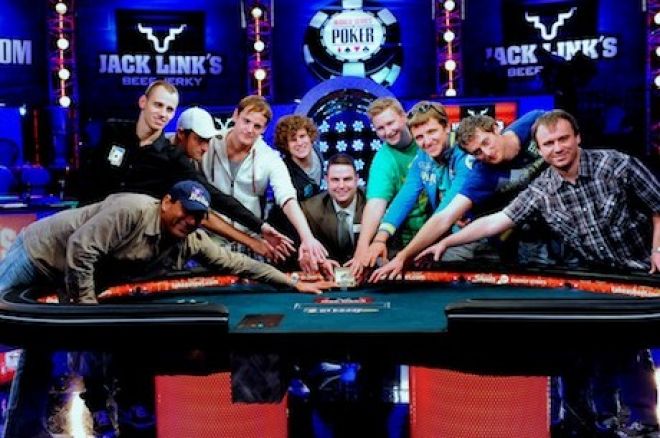 After four long months of waiting, building the suspense to palpable levels, the 2011 World Series of Poker Championship Event “November Nine” will step to the felt this afternoon (for most of the world) to begin to determine the World Champion.

Set to kick off this morning at 11:30AM (Pacific Standard Time) at the Penn and Teller Theater at the Rio in Las Vegas, the 2011 version of the “November Nine” will be historic in its own right. Rather than watching the action on tape, the final table will be aired – with a slight delay – over ESPN, which will allow the viewers to be a part of the excitement that has become the WSOP Main Event final table. It also may be swan song for the “November Nine” format.

Rumors have abounded over the past few days that this year’s “November Nine” may be the last, especially with ESPN stepping up and providing the “nearly live” coverage that it did for the final few days of the Championship Event this year. With such a live draw – if ESPN were to continue the “nearly live” format – it wouldn’t make sense to delay the final table and kill the drama. For this year, however, we have the “November Nine” and it is set up to be a memorable one.

The most international field ever assembled for the WSOP Championship Event final table, the nine men who will gather later today seem to reflect the changing times of the game. With seven different nations represented – including first timers Belize, the Czech Republic, the Ukraine and Germany – this year’s final table is truly representative of the worldwide nature of poker. Additionally, the final table is comprised of mainly twenty-somethings (Staszko, at 35, and Bounahra, 49, are the only players older than 30) – players who weaned themselves on the internet version of the game rather than the casinos of the world.

In handicapping the field for today’s play, the proximity of Lamb and Staszko to each other has to be examined. Both were quite active in the play up to the final table; will they knock heads in the early going or will they attempt to stay out of each other’s way until there have been a few eliminations? Giannetti, sitting in the one seat, will also have to deal with Staszko (who will be the small blind at the start) and Lamb (the button).

The three short stacks – Makievskyi, Holden and Heinz – sitting near each other also provides for some potential interest. As these three will be in that button-small blind-big blind situation, will they attempt to siphon off each other’s chips or will the bigger stacks around them attempt to put the pressure on?

One final issue to look at is “who’s hot” at this time. Giannetti has had arguably the best run since the “November Nine” was determined, winning the World Poker Tour event in Malta in September and taking a third place finish in an European Poker Tour London side event in October. Heinz won a side event at the EPT Barcelona, while Staszko, O’Dea and Makievskyi have all earned a cash since July.

Today’s play will not be the end of the drama. The players will play down to the final three players, then take a break Monday and come back Tuesday afternoon to determine the champion. However it plays out, the eventual survivor of this year’s “November Nine” will have escaped a difficult gauntlet and will be highly worthy of the title of “World Champion.”