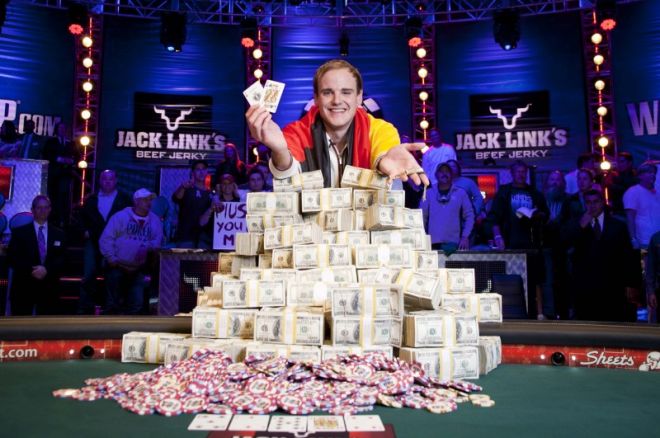 For months, poker fans around the world have waited to find out who will be crowned 2011 World Series of Poker Main Event champion. On Tuesday night, Pius Heinz earned that honor.

On Sunday, the 2011 November Nine reconvened for the first time since July and played down to the final three players. After a day off, Pius Heinz, Ben Lamb, and Martin Staszko made their way back to the Penn and Teller Theater inside the Rio All Suites Hotel and Casino to play for poker immortality.

Here’s a look at the chip counts at the beginning of play on Tuesday:

Let’s Get It Started: Much to the surprise of the entire crowd, the first hand of play (Hand No. 179) was a doozy. Pius Heinz folded the button and Ben Lamb raised to 3 million from the small blind. Martin Staszko exercised his option in the big blind with a three-bet to 7.5 million, and Lamb responded by moving all-in. Staszko made the call and there was 85.6 million in chips on the line.

The two were racing, and Lamb’s rail, which constituted the largest section of the crowd, was on their feet. The Penn and Teller Theater was electric, but fell eerily silent as the board ran out

. Staszko’s pocket pair held to give him the double, and Lamb was knocked down to just 12.7 million.

New Chip Leader: As if the first hand wasn’t enough, on the second, Martin Staszko took the chip lead. Staszko raised to 3 million from the small blind and received a call from Pius Heinz in the big. When the flop fell

hit the turn. Both players checked, and then Staszko fired out 4.5 million. Heinz hit the tank for a long while before making a big raise to 14.2 million. Staszko tanked as well, before making the call. He tabled

and was good against Heinz's

Stunned: On the fourth hand of play (Hand No. 182), Ben Lamb moved all-in from the small blind with

and Staszko called from the big blind with

. In mere minutes, Lamb, who was the fan favorite, went from second in chips to having his tournament life on the line.

The crowd, the majority of whom were there to support the 2011 WSOP Player of the Year, was on their feet. A mixture of cheers, some for Staszko but more for Lamb filled the theater as the dealer prepared to deal the flop.

Lamb was in desperate need of a queen, but the

flop did not deliver. The

was far from helpful, and Lamb’s rail was deflated. The

Heinz Back in the Chip Lead: After five hands of heads-up play (Hand No. 187), Martin Staszko limped on the button only to have Pius Heinz raised to 3.7 million. Staszko made the call, and then proceeded to call a bet of 4.3 million on the

appeared on the turn, Heinz fired out 8.8 million, Staszko insta-called, and the

This time Heinz checked and Staszko put out a bet to the tune of 14.5 million. With close to 50 million in the pot, nearly 25 percent of the chips in play, Heinz announced that he was all-in for 74.4 million. Staszko shook his head in bewilderment before folding his hand. With that, Heinz reclaimed the chip lead with 122.9 million to Staszko’s 83 million.

Chip Lead Back to Staszko: The two players proceeded to trade blinds back and forth until on Hand No. 203 when Martin Staszko limped from the button, Pius Heinz checked his option, and the flop fell

Heinz wasted little time in leading out for 2,000,000, Staszko called, and the

appeared on the turn. Again Heinz bet, this time 4.5 million, Staszko flatted, and the

peeled off on the river. Heinz thought for a minute and a half before sliding out 14.25 million, and Staszko thought for about the same amount of time before making the call.

for two pair, which was no good against Staszko's two pair with

Big Move by Staszko: Pius Heinz managed to make his way back into the chip lead with a few small pots, but lost it soon thereafter when Martin Staszko raised to 3.5 million from the button. The aggressive German responded with a three-bet to 10.1 million, Staszko called, and the flop came down

. Heinz kept the pressure on with a 9.8 million bet. Staszko wasted little time in making the call, and the dealer turned the

In the ESPN broadcast, it was revealed that Heinz held

. Neither had so much as a pair, but Staszko’s brazenness earned him the pot.

Big pot for Staszko: On Hand No. 228, Pius Heinz opened for 3.4 million and Martin Staszko called from the big blind, leading to a flop of

. After a check, Heinz upped his bet to 3.8 million, Staszko called, and the

paired the board on the turn. At this point, Staszko checked, Heinz bet 8.4 million, Staszko raised to 18.5 million, and Heinz called, bringing the

river. Staszko took the initiative and led out for 20.25 million, which prompted Heinz to fold.

Heinz, who laid down

, dropped to 64.6 million while Staszko, who held

Back and Forth: Seven hands later, Pius Heinz had pulled back to even; in fact, only 900,000 separated the duo with more than 206,000,000 chips in play. Heinz went on to win the next five hands in a row to reclaim the chip lead, one he extended to 123.4 million to Staszko’s 82.5 million. Over the next hour, the two battled back and forth with the chip lead swinging back to Staszko. Heinz dwindled a bit only to fight his way back into contention. So it went for nearly fifty hands before Staszko managed to pull out to a 3-1 chip lead.

Heinz Catches Up: With the blinds at 1.2M/2.4M with a 300,000 ante, Martin Staszko limped on the button on Hand No. 293 only to have Pius Heinz raise to 7.9 million from the big blind. Staszko made the call and then watched as Heinz fired out 8.2 million on the

flop. The Czech opted for a raise to 17.5 million, Heinz moved all-in for 72.95 million, and Staszko made the call, the first all-in and call of the heads-up battle.

Staszko held a massive draw and had a 46 percent chance of winning the championship. The

turn was kind to Heinz and sent his rail into a brief celebration, but there was still one card to come. Luckily for Heinz, it was the harmless

A Champion is Crowned: A few hands later, on Hand No. 301 of the final table, Martin Staszko open shipped for 39.5 million and was snap-called by Pius Heinz.

Heinz was out in front, and Staszko was in need of some help. The

flop was not particularly exciting, but the

turn did give Staszko four extra outs to a straight. When the

blanked on the river, the crowd erupted in celebration for Heinz, who rushed to his rail and was immediately swallowed up by his fans.

It was the longest heads-up battle in over 10 years, but in the end it was the 22-year-old German, Pius Heinz who dispatched Martin Staszko of the Czech Republic.