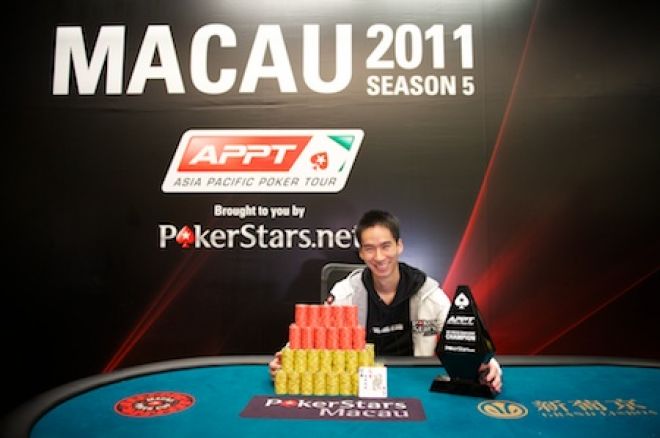 The 2011 PokerStars.net Asia Pacific Poker Tour Macau Main Event completed on Sunday after a long day of action. Fifteen players returned to action on the last day of play, which made things last a tad bit longer than normal. To begin the day, Sangeeth Mohan was the man in charge. He held the chip lead to enter the day, but was not the one to walk away with the title. That man was Team PokerStars Online's Randy Lew. He topped Jimmy Pan in heads-up play to claim victory and earn HKD$3,772,000.

Sparrow Cheung was the first player eliminated on Day 4 and he was followed out the door by Josh Barrett, Tsugunari Toma, Daoxing Chen and Baton Fung before the tournament came to the final table bubble. Two tables were stacked with five players each with the final nine making the official APPT final table.

, and Fam checked to Mohan. Mohan bet all of his chips and Fam quickly called with the

. Mohan had flopped top set with

, but wasn't in the clear yet. Fam held a big draw and spiked it on the turn when the

fell to give him a flush. The river failed to pair the board and Mohan was eliminated to officially set the final table.

The first player to be eliminated at the final table was the man with the most major final table experience, David Steicke. Steicke was crippled to just a few big blinds before getting the last of his money in with

. He was up against Daniel Nordstrom and his

. Despite flopping a straight draw on the

river failed to give Steicke what he needed.

Next to go was Zheng Tai Tan in eighth place. He was all-in preflop with pocket deuces, but crushed by Jeff Rossiter's pocket eights. The board ran out

and Tan hit the rail.

Nordstrom went out in seventh place and he fell at the hands of Rossiter as well. Then, in sixth place, was Fam. He was eliminated by Lew. After that, Zuo Wang fell in fifth and Fabian Spielmann in fourth.

When three-handed play began, Rossiter held the chip lead, but it would all soon disappear. Rossiter got into a battle with Lew that saw the two flip for nine million chips. Rossiter five-bet all-in and Lew made the call to put his tournament life on the line. Lew held

. A clean board of

followed and Lew secured a double up.

and ran into Jimmy Pan's

When heads-up play began, Lew had the slight edge. He was up 9 million to the 8.25 million for Pan. At the beginning of the match, Lew began to pull away, but then Pan doubled up to take the lead ten million to seven million. Lew stayed focused, though, and fought his way back in front. But then, he lost the lead again and was back up against the wall.

. Lew was all-in preflop for around 6 million and flopped a set with a six in the window. That win gave him a big lead of 13 million to 4.25 million, and the match ended shortly thereafter.

On the final hand, Lew and Pan got all of the money in on the

for top two pair and was up against Pan's

. The turn brought the

, which left Pan needing just a king on the river. The

fell and that was it. Pan was eliminated in second place while Team PokerStars Online's Lew took home the title.

This win is by far the largest of Lew's career. Prior to this score, his largest live cash came in January when Lew took 10th place in the Aussie Millions Main Event for AUD$100,000.