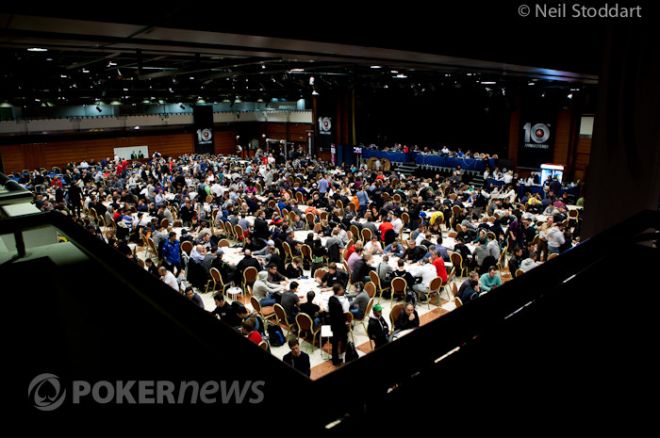 Tuesday was a record-setting day at the PokerStars.com European Poker Tour Prague. The Day 1a flight a day prior had drawn 234 runners to the felt, and the Day 1b session pulled 488 players to round out the field at 722. That's far and away the largest major poker tournament ever hosted by the Czech Republic, and it puts a first prize of €775,000 up for grabs. The attendance was also up significantly from last year's 563 and the previous record, Season 6's 584-player field.

A leisurely eight levels left 274 survivors bagging up chips in time to catch a late dinner in Old Town. Andrey Saenko emerged from Tuesday's flight with the most chips, and his 200,800-chip stack makes him the overall leader heading into the combined Day 2. He's the only player to have crested the two-century mark so far. With more players in the room and more chips on the tables, eight players were able to accumulate stacks larger than Day 1a's leader Vedzizhev Beslan (132,200).

The Team PokerStars Pros were out en masse on Tuesday, including one half of Team PokerStars Pro Czech Republic, Martin Hruby. He had a quiet day hovering around his starting stack, and he'll have some work do Wednesday with around 20,000 chips left.

From just across the border, Slovakia's Dag Palovic also played Day 1b, though it was hard to spot him at first. Thanks to a prop bet with the aforementioned Hruby, Palovic came to play dressed in drag with a black dress, gloves, and a long blonde wig. The outfit suited him well; Palovic survived to bag up 73,200 at night's end.

Speaking of world champs, the reigning World Series of Poker champ, Pius Heinz was in the house for Day 1b, but things did not go so well for him. Midway though the day, the champ was crippled in a three-way pot when his pocket tens ran into Dominik Nitsche's two jacks. Heinz was left short with about ten big blinds, and he was relieved of that remainder a few orbits later and headed to the rail. There, he was joined by Salvatore Bonavena, Arnaud Mattern, Dario Minieri, Sandra Naujoks, Ivan Demidov, Sebastian Ruthenberg, and Johannes Strassmann as Team Pros who failed to survive the first day.

The eliminations came at a quick pace as the day dragged on, and a few notables managed to amass dangerous chip stacks. Lebanon's Ramez Haddad was one of the first to pip across the 100,000-chip mark, and Sweden's Anton Wigg, who is a former EPT champion, was doing similarly quick work at the adjacent table. Max Greenwood has a bracelet but no EPT title, but his Day 1b went rather swimmingly to leave him with just shy of 100,00 chips in the bag for Day 2. Max Silver put a beat on someone early on to double his starting stack, and he managed to work it up to 177,100 by the end of the eight-level day. That's good for third place overall.

With 133 making it through Day 1a, a total of 407 players will return for a big Day 2 on Wednesday. Play recommences at 1200 CET (0300 PST), and our Live Reporting Team will be right on the rail to bring you all of the action as it unfolds.

Following us on Twitter is the best way to get up-to-the-minute poker news delivered to your timeline.