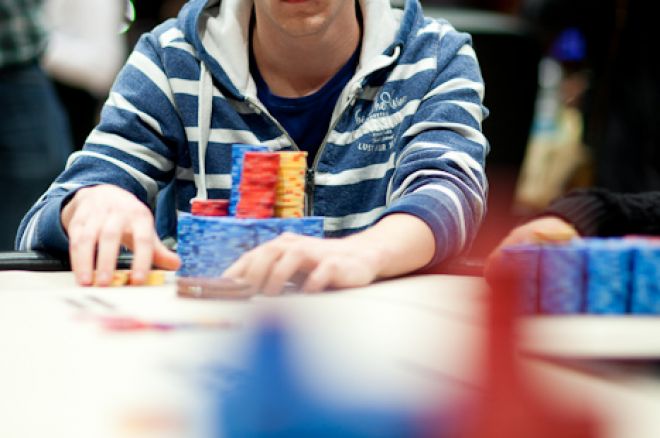 From a record-smashing starting field of 722 players, the final 136 returned to the felt on Thursday at the PokerStars.com European Poker Tour Prague. It was Day 3, and the bubble was looming. Garry Tesorov held the lead when play began and after seven levels is still alive and kicking. Holland's Patrick Renkers has overtaken him for the chip lead, however, and his count of 2.423 million gives him the most ammunition heading into Friday's penultimate day. In fact, he's got nearly double the chips of his nearest rival, Martin Finger.

As expected, the pace of the eliminations tapered off as they closed in on the 104-player mark and the start of the payouts. Once play made it to the hand-for-hand stage on the direct bubble, it took nearly a full level to find the unlucky elimination. Mads Amot went home with the proverbial wooden spoon in 105th place, but the other 104 returned from a break to learn they had all made some money.

Once the bubble was out of the way, the processional to the cashier could commence. Small cashers included EPT6 Grand Final champion Nicolas Chouity, Grayson Ramage, Marty Smyth and Mike Watson.

Team PokerStars Pros Liv Boeree and Dag Palovic had been plodding along rather well, but their respective exits came within just minutes of each other.

Boeree fell first when she called a five-bet shove with

. Tevosov was the one flipping against her with

board was all on the wrong end of the deck for Boeree. She was out and Palovic lost a flip of his own with pocket nines to follow her to the payout desk. Those exits left Jude Ainsworth and Juan Manuel Pastor as the last remaining members of the PokerStars family. They both survived and will return on Friday with 929,000 and 742,000 chips, respectively.

The bust-outs mounted, but a few other notables were finding some success accumulating stacks. Mike "Timex" McDonald began the day under 150,000, but he improved upon that with the elimination of Max Silver halfway through the day. Silver was short when he shoved with

ended up flushing the river to earn the knockout.

After a subsequent slip-up, McDonald doubled back when his pocket nines rivered a lucky set against Nicolas Leger's pocket jacks. That was the end of the downswing, and McDonald's stack swelled over the final three levels. His pocket aces beat Petr Jaros twice — once right before dinner and again right after — and McDonald finished the day with 740,000 chips in his bag. Perhaps coincidentally, or perhaps not, this event marks the four-year anniversary of his first tournament cash. What's more, he's the only former EPT champion still in contention to become the tour's first double champion.

Nobody had a better day than Renkers, though. He began play with a decent stack of 308,000 but fell down around 150,000 in the early going. But no worries for the Dutchman. He moved up over 600,000 when he flush-over-flushed Lebanon's Danny Richa. Just a few minutes later, he moved over the million-chip mark when his pocket aces found action from Torsten Otte's inferior pocket kings. After knocking out Joe Serock, Renkers pulled in the biggest pot of the tournament in a tangle with fellow big stack Dennis Bejedal.

Bejedal flopped middle set with pocket queens, but Renkers called a check-raise and drilled his gunshot Broadway draw on the turn. Bejedal ended up paying off a big river shove, and the grandaddy pot was pushed to his corner to give him heaps of momentum. He only trended up from there, finishing strong with well over 10 percent of the total chips in play.

The 31 survivors will return to the Hilton Prague at 1200 CET (0300 PST) on Friday to play down to the final table. Here's how the top ten stack up:

Our live reporting team will be back tableside, and you can follow along with all of the action as the field is reduced to the final table.

In the meantime, follow us on Twitter to keep up with all the goings-on elsewhere in the poker world.