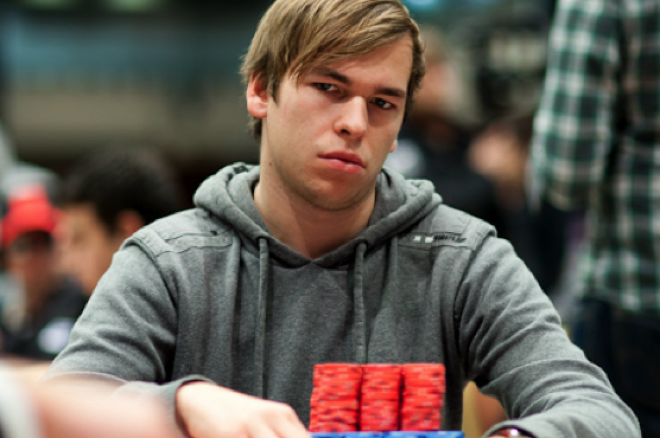 When the day began, 31 players remained. The first player eliminated on the day was Sharon Volfer. That elimination was followed by the busting of Team PokerStars Pro Juan Manuel Pastor in 30th place. The other Team Pro still remaining, Jude Ainsworth, ran all the way down to the final two tables before he fell in 14th place.

Ainsworth's demise came in two back-to-back hands that saw him first lose chips to Andreas Wiese and then get eliminated by Patrick Renkers.

On the first hand, action folded to Ainsworth in the small blind and he put in a min-raise to 60,000. Wiese, in the big blind, three-bet to 155,000. After some time tanking, Ainsworth four-bet to what looked to be 255,000. Wiese quickly stuck all of his money in and Ainsworth snap-folded. That left Ainsworth with under 700,000 in chips before losing the rest on the very next hand.

. He was looking for a lucky six on the river, or an ace. He could also chop the pot if a seven fell. The

peeled off and that wasn't what Ainsworth needed. He sent over his chips to Renkers, who assumed the chip lead once again with that pot.

Start-of-the-day chip leader, Renkers was the final elimination of the day. His ninth-place finish solidified an official final table appearance for the other eight players at EPT Prague and sent everyone home from the day.

Guillem Usero raised to 105,000 in early position, and Finger flatted from two seats over. Next however, Renkers squeezed in a reraise to 185,000, and that folded Usero out of the way. Finger wasn't going anywhere, though, and he shoved all-in over the top. The call came instantly, and the two men were very close in chips as they turned over their coin flip.

Finger grabbed the lead as the dealer gave him a friendly

flop, and Renkers would not be able to catch back up. The turn

completed the board, and the Dutchman could not find any love from the ladies.

The final table will commence Saturday at 1200 CET (0300 PST). It's going to be a great day of action with €775,000 up for grabs in first-place prize money. We know you want to find out who will be walking away with the title, so be sure to join us right back here at PokerNews for all the action.

In the meantime, follow us on Twitter to keep up with all the goings-on elsewhere in the poker world.