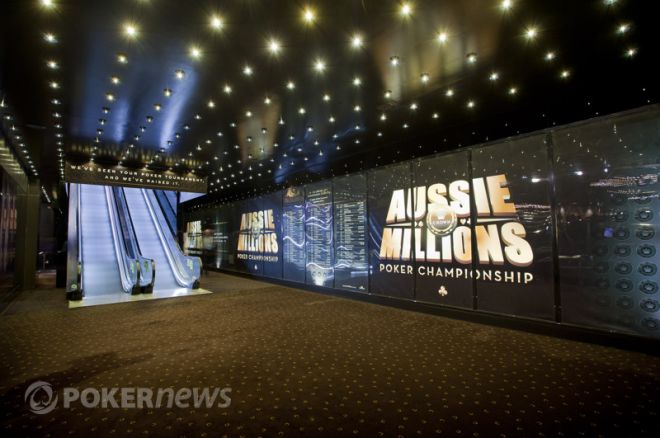 The 2012 Aussie Millions Poker Championship is in full swing and has already knocked out three of the 26 scheduled events. Brendon Rubie and Dan “djk123” Kelly claimed respective victories in the first two events, starting things off with a bang. More of poker's top pros have been arriving at Crown daily including Jeffrey Lisandro, Gus Hansen, Randy Dorfman, and Erik Seidel, all of whom have had past success in Melbourne. There are still plenty of pros on their way, as well.

Just landed in LA. Have a few hours to kill before flight to Melbourne for the Aussie Millions.

Its official, off to aussie millions in a cpl days!! should be a fun trip

@LynnGilmartin @crownpoker I'll be there for the 100k then we can pop bottles and celebrate my win. Or just celebrate life if I don't lol

On Tuesday, Jan. 17, the Aussie Millions Event #3: $1,100 No-Limit Hold'em Shootout reached its 150-player cap and played down to a final table. A number of notables came and went on Day 1 including B]McLean Karr, Vitaly Lunkin, Van Marcus, Billy Argyros[/B], Maria Ho, Jonathan Karamalikis, and Marc Convey, with Karr finishing in 12th place and falling just shy of his second consecutive final table at the 2012 Aussie Millions.

The next day, the final 10 players returned to play down to a winner, with Aussie Millions ring-winner Oliver Speidel leading the pack with 384,500 in chips. Joining him at the final table was Joey Lawrence, Mark Segal, and Jackie Glazier.

Less than four and a half hours into the final table, a winner was crowned. Speidel managed to make it to heads-up play, but by that time his opponent, Sandeep Pulusani, held a 4-1 chip lead. Unfortunately for Speidel, there was no comeback as Pulusani, a music blogger from the United States who started the final table fifth in chips, captured the $37,500 first-place prize.

Here’s a look at the Event #3 Final Table results:

A winner will be determined Thursday in Melbourne, so stay tuned to PokerNews for a recap of the event.

Event #5 $1,100 Six-Handed NLH is scheduled to kick off on Thursday, Jan. 19 and PokerNews will be providing live updates from the two-day event. Visit our Live Reporting section to follow the action from Event #5, as well as other events throughout the 2012 Aussie Millions.