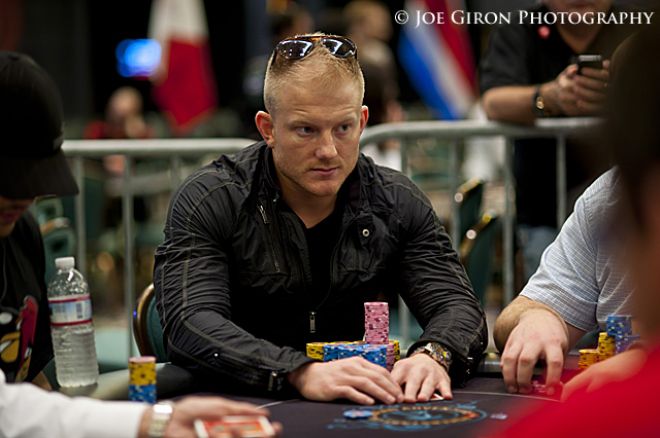 The final table of the 2012 PokerStars Caribbean Adventure $25,000 High Roller was set after just under 10 hours of play on Friday's Day 2. When the day began, 56 players remained. At the end of the day, the field was whittled all the way down just eight with Jason Koon topping the final bunch with 1.646 million in chips.

Koon is no stranger to big buy-in events, but he's never cashed in anything above a $10,000 buy-in (which is still pretty hefty, though). Since 2008, Koon has been grinding the tournament circuit, racking up $427,251 of prize money in the process. His largest live score came in October of 2010 when he placed fourth in the World Poker Tour Festa Al Lago at the Bellagio in Las Vegas for $225,680. Koon and the other seven players have locked up a minimum of $108,780 for making this final table, meaning he'll be adding plenty more to those lifetime tournament earnings.

With 56 players returning and only the top 16 spots making the money, there were plenty of players who exited the tournament empty handed. Some of those players included Benny Spindler, Andrew Lichtenberger, Galen Hall, Kevin MacPhee, Jen Harman and Dan Shak. Team PokerStars Pro also had a few members fall to the rail prior to cashing and those players were Pierre Neuville, Joe Cada, Barry Greenstein and Ville Wahlbeck.

As play grew closer and closer to the bubble, Mike McDonald voiced on Twitter, "Approaching the 2nd biggest bubble of my life and the 2nd biggest bubble of this week." Then, after Keven Stammen and Manny Jo were eliminated in the same hand just a hair short of the money by Koon, 17 players remained and it was bubble time. Little did McDonald know that it would be him bubbling the event.

McDonald found himself all in with the

of Bill Perkins. The flop came down

, which was followed by the

to send the chips Perkins' way, McDonald to the rail and the remaining 16 players into the money.

At that point, the shorter stacks began ducking out rather quickly. Some of the notables to finish in the money were Elio Fox (16th - $58,020), Matt Marafioti (11th - $72,250) and Nick Yunis (9th - $79,770). To start the day, Yunis topped the field. Yunis was one of the seven players to re-enter the event after he busted his first entry and then went on to win a single-table satellite to get back in.

Saturday's final table is set to be an amazing one. The cards are scheduled to be in the air at 1300 EST (1800 GMT) and PokerNews will be on hand for all of the coverage.