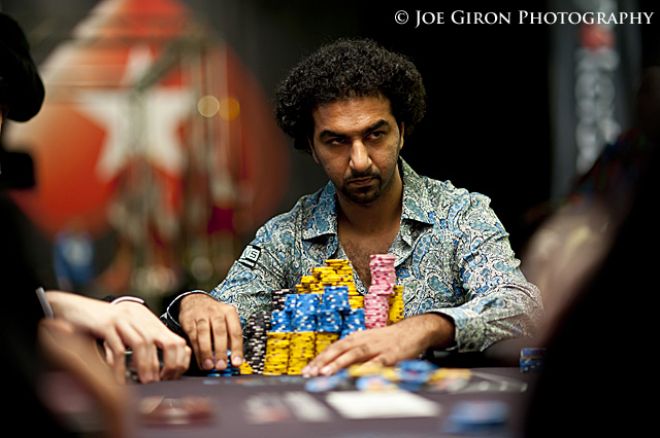 The 2012 PokerStars Caribbean Adventure Main Event resumed on Monday with 544 players remaining from the starting field of 1,072. After six levels of play only 183 are still in the hunt to capture the $2,000,000 first-place prize. Day 2 belonged to one player — Faraz Jaka. He is well ahead of the pack and heads into Day 3 with a stack of 902,500.

Jaka began Day 2 with 129,500 in chips and quickly took over the top spot on the chip leaderboard. He took the lead during the first level of play Monday and had chipped up to about 700,000 by the time Chino Rheem was moved to his direct left. Rheem, with about 300,000 at the time, couldn't have been given a worse seat, and less than two hours later, most of his chips were in Jaka's stack. Jaka bet every step of the way on a

board, culminating with a cool 100,000-chip bet after the river. Rheem called him down, but couldn't beat Jaka's

Jaka finished the job shortly thereafter when Rheem put his last 15,000 in from under the gun with

in the big blind, Jaka called and secured the elimination when the board came down

Sitting fourth in chips, Connor Drinan's day started in a downward trend. He began the day with 142,700, but Drinan found himself with about 50,000 early on before scoring a crucial double elimination. With the board reading

and Bertrand "ElkY" Grospellier already all-in, Drinan check-called a bet from Hoyt Corkins. When the

, besting Corkins' aces and Grospellier's holdings to vault up the counts and remain near the top for the duration of Day 2.

Among those who failed to make it through the day were Team PokerStars Pros Dario Minieri, Humberto Brenes, Lex Veldhuis, Angel Guillen, Victor Ramdin, and Vanessa Selbst. Others who joined them on the rail included Christian Harder, Jon Turner, John Racener, Michael Mizrachi, Will Failla, and Kevin MacPhee.

Play is scheduled to pick up at 1200 EST (1700 GMT) Tuesday. Be sure to follow along right here as the PokerNews Live Reporting Team brings you all the action, eliminations, and drama from the 2012 PCA at the Atlantis Resort in the Bahamas.