Five Thoughts: It's Good to be King 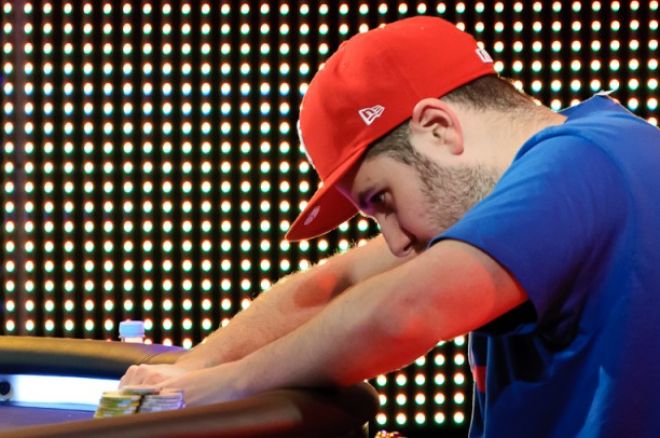 With the 2012 Aussie Millions Poker Championship running, Crown Casino is abuzz. In the last week, a new six-figure buy-in winner was crowned, we've seen someone win a golden ticket, a former November Niner won the Sunday Million, and online poker was discussed on national radio.

It's that time, boys and girls.

1. King of the castle

After reaching heads-up play with one another, however, Smirnov and Smith are now proud members of the half million-dollar club.

, and Smith doubled to 1.334 million chips. Smirnov was left with just 866,000. From that point on, there were at least four lead changes.

. The ducks held as the board ran out

Smith, who is a very likeable guy, received an outpouring of support on Twitter:

Did @Dansmithholla win the 100k yet? Bout time this kid ships something #couldhebemoredue?

A huge congrats to @dansmithholla for winning 1st place and over a million in the #AM100k. #luckypiecetheory

Tyron Krost, the 2010 Aussie Millions Main Event winner, will not be headed to a chocolate factory to meet Gene Wilder and eat scrumdiddlyumptious treats, but he did win the golden ticket.

Last week, to celebrate a decade of success, the Crown hosted the 10th Anniversary Aussie Millions Tournament of Champions. The nine previous Main Event winners were invited to play in a freeroll in which the winner would receive the golden ticket — entry to the Aussie Millions Main Event every year for an entire lifetime. Eight of the nine accepted the invite — Alex Kostritsyn couldn’t make it — and Krost, who missed close to an hour of play because he was at the final table of Event #4 (fourth for AUD$40,185), defeated Tony Bloom (2004) heads-up to win the golden ticket.

This idea is awesome, but let’s take it a step further. What if, like the Masters golf tournament, every winner was given a golden ticket? Maybe I’m getting ahead of myself, but this would be a great way to celebrate the champions. We could also give them green jackets. Maybe Adam Sandler would make a Billy Madison 2: All In, where he has to win his own house back by winning the Aussie Millions Main Event. OK, I’ve officially gotten ahead of myself.

While the Aussie Millions is buzzing Down Under, there is still plenty of action on the virtual felt, and this past Sunday, James “Asprin1” Akenhead bested a 7,125-player field to win the PokerStars Sunday Million and $213,750. On the final hand of play, pnp23 was all-in and at risk with pocket eights against Akenhead’s

, and Akenhead won the tournament.

“Massive thank you to everybody for their messages and railing,” Akenhead posted on Facebook. “It feels so good to break through the horrible run I’ve been on. Literally can’t wait for 2012, it’s going to be such a great year, I know it.”

Since finishing ninth in the 2009 WSOP Main Event ($1,263,602), Akenhead’s largest score in an open, live event is only $42,285. Right before the Main Event final table, he also finished ninth in the World Series of Poker Europe Main Event ($109,687), but other than that, this has been a very dry spell. Akenhead has had some success online however — in addition to this win, he finished fourth in the 2011 PokerStars World Championship of Online Poker Event #53 for $71,887.

It’s always nice to see a former November Niner do well, and hopefully his forecast for the rest of the year comes true.

A National Public Radio (NPR) show called Here & Now discussed the issue of online poker on Monday, and while it was exciting to hear poker talked about on such a large forum, nothing that was said was really substantial.

The guest, I. Nelson Rose, a professor at Whittier Law School and an expert on gambling law, explained what we already know about Black Friday, The Wire Act, and the prospects for intrastate Internet gambling.

Unfortunately, the response from NPR listeners, who tend to be more liberal, was not good.

“Bad Bad Bad Idea.” – Eb3design
“This is exactly what we do NOT need.” – Neil Blanchard
“While I enjoyed playing online poker in the past, the prospect of seeing it become legal and in the mainstream concerns me.” – Ken Palosi

What the hell, Ken! You’re supposed to be on our side!

Spots like this on national radio are obviously terrific, but if we can’t get the ball rolling in a positive direction, then we’ll just tread water forever. If we can’t win NPR listeners over, we’re never going to get a federal online poker bill passed.

5. Melanie Weisner rides a unicycle and Tony G yells into a microphone

Must we say more?