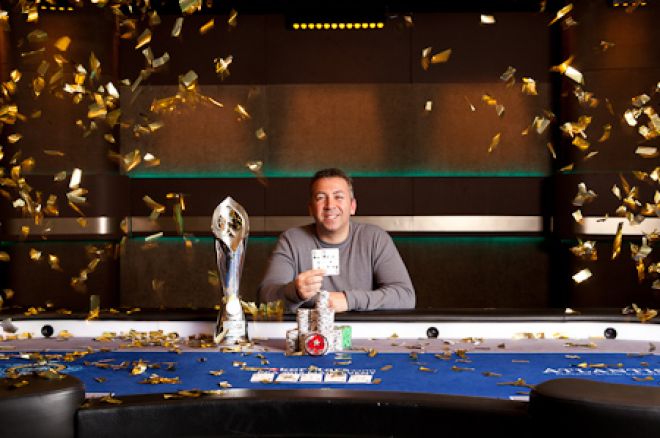 After seven days of tournament-poker action, a winner was crowned in the 2012 PokerStars Caribbean Adventure Main Event. John Dibella, who began the final table fifth in chips, emerged victorious.

Ruben Visser started the table fourth in chips, but had what he called the worst seat at the table. With the big stacks on his left and the short stacks on his right, Visser wasn't in the ideal position and he was the first to fall. He lost a good portion of his stack when Mark Drover moved all-in with

for about nine big blinds. Visser called from the big blind with

and although he flopped a flush draw, his hand never improved. He bowed out soon after when his

lost a race to Kyle Julius'

when a queen hit the flop.

David Bernstein exited next when he three-bet shoved

and he was soon followed out the door by Anthony Gregg. Entering the final table as the short stack, the 2009 PCA Main Event runner-up fought hard, but ran

. Gregg picked up a flush draw on the turn, but did not connect and finished in sixth place.

Mark Drover, at one point during the early stages of the final table, had a mere three big blinds left in his stack. However, four double-ups brought him back in the game before ultimately busting in fifth place. With

, Drover's three-bet shove was met by a call from Faraz Jaka who tabled

. No help came for Drover and four players remained heading into the dinner break.

The first hand back from dinner was Xuan Liu's last. She moved in on the button with

and was called by Jaka in the big blind with

board sealed Liu's fate as the fourth-place finisher.

Jaka and Julius traded turns as the chip leader during three-handed play before the two tangled in a game-changing hand. A preflop raising war between Jaka and Julius ensued, culminating with Jaka five-bet shoving

flop locked up the double for Julius.

Jaka doubled on the following hand, but soon thereafter, a huge turning point occurred that gave John Dibella the chip lead. Jaka opened the pot with a raise on the button holding

. Dibella, in the small blind, three-bet with

. Julius woke up with

in the big blind and smooth-called. With the feeling he was beat, Jaka ducked out of the way and allowed his two opponents to see an

flop. Dibella check-called with his set before filling up on the turn when the

fell. A check-raise jam from Dibella got both players' chips into the pot and Julius did not catch up on the river.

Jaka hit the rail shortly thereafter when his

after the board ran out

. Unfortunately for him, Dibella rivered a flush with

With this win, Dibella, a 43-year-old stock trader from Westcherster County in New York, demolished his previous largest cash, a 60th-place finish in the 2008 PCA Main Event worth $16,000.

Although PokerNews' coverage of the PCA Main Event has concluded, we'll be back with the PCA High Roller Final Table Saturday. Check out our Live Reporting pages for all of the action.