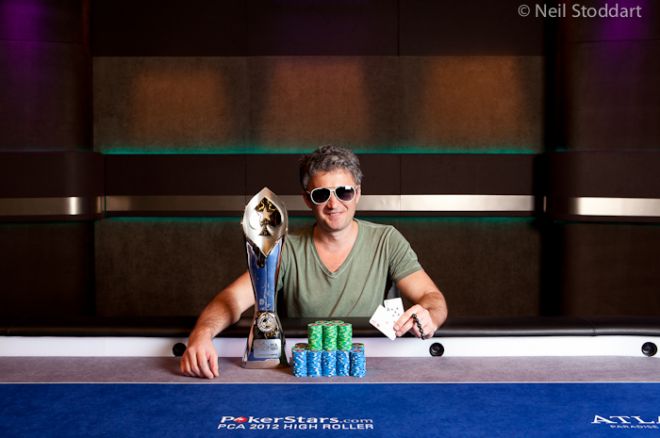 The 2012 PokerStars Caribbean Adventure $25,000 High Roller wrapped up Saturday night with Leonid Bilokur topping a field of 148 to capture the title. Bilokur began the final table fourth in chips and stayed out of the way in the early stages while players began to drop.

Team PokerStars Online member Randy "nanonoko" Lew entered the final table on the short stack and despite doubling up twice, he was the first to fall. He picked up

in the cutoff and watched as Nicolas Fierro and Jason Koon both re-raised behind him. Unfortunately for Lew, Koon held

and quickly called Lew's five-bet shove. Lew found some help as the

turn left him with outs to a flush, but the

Michael Telker appeared to be quite card dead during his time at the final table, but found a good spot to shove after the aggressive Fierro opened a pot. Telker, with

, shoved from the small blind. Fierro called with

and eliminated Telker when the board ran out

. Govert Metaal, last year's fifth-place finisher in this very tournament, busted in sixth place this time around. His

and did not improve.

Going into the dinner break, Bilokur commanded a sizable chip lead after winning a big coin flip against Koon. They were the two biggest stacks at the time and tangled in a huge pot. Bilokur four-bet jammed his 53-big-blind stack with

. A call from Koon delivered a

board to give Bilokur the chip lead.

When the players returned from dinner break, Fierro busted in fifth place when his pocket deuces failed to improve against Isaac Haxton's pocket tens. Koon followed him out the door shortly thereafter, five-bet shoving

. No help arrived for Koon, and he was eliminated in fourth place.

Haxton fell short of heads-up play, getting his stack into the middle with

after four-bet shoving against Duhamel. With

, Duhamel called and held through the

Heads-up play began with Duhamel holding 5,430,000 in chips to Bilokur's 1,960,000, but the duel was pretty one sided as Bilokur battled back to take the lead and eventually go on to win the tournament. The final hand saw Duhamel three-bet shove with

against Bilokur who called with

flop all but ended Duhamel's chances to catch up in the hand, with the

Although PokerNews' coverage of the 2012 PCA has concluded, you can be sure to check back to our Live Reporting pages because we'll be at plenty of tournament stops across the globe just about every week.