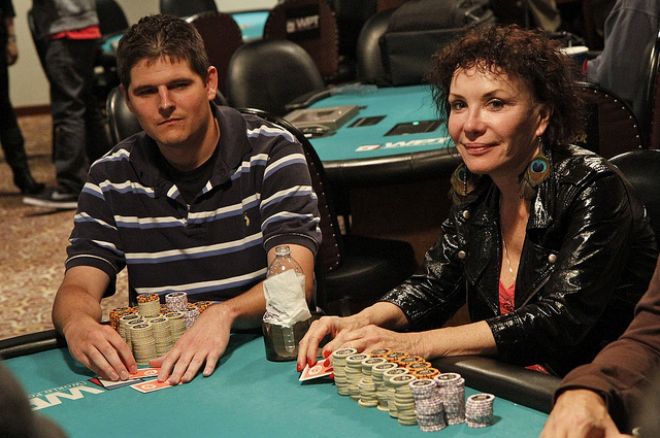 Sunday marked Day 2 of the World Poker Tour Lucky Hearts Poker Open at the Seminole Hard Rock Hotel & Casino. There were 112 players remaining from the overall starting field of 295. Leading the way to start was Matt Juttelstad, and by the end of the day, he once again found himself atop the pack. Juttelstad was able to grow his stack from 280,000 to 805,000 to finish the day.

Plenty of notables remained to begin Day 2, including Matt Giannetti, Jason Mercier, Tristan Wade, Shannon Shorr and Matt Waxman. Unfortunately for them, all were eliminated on the day. From that group, Giannetti was the first to go.

According to the WPT Live Update Team, there were roughly 9,000 chips in the middle on a

flop with Giannetti pitted against Lazaro Hernandez. The latter bet 8,000 and Giannetti raised to approximately 27,000 and was all-in. Hernandez made the call straight away with

for overcards and a flush draw. The turn

gave Giannetti some more outs with a straight draw, but the

on the river wasn't what he was looking for.

Mercier went out during Level 15 with the blinds at 1,500/3,000/500 in a hand against Angelo Miele. After a preflop raise from Mercier, Miele called to see the flop come down

. Mercier fired a continuation bet and Miele called to see the

for a turned flush. Mercier held trip tens with

and needed to fill up on the river. The

on the fifth street couldn't give Mercier the boat he needed and was eliminated.

As the day wound down and players headed to the rail, the money bubble approached. Set at 27, the money was not hit on Day 2 because play ended with 34 players remaining. On Monday, the money bubble will burst and everyone making it that far will pocket at least $8,629.

Play will resume Monday at 1200 EST (1700 GMT). Be sure to stay tuned to PokerNews for daily recaps of the WPT Lucky Hearts Poker Open in Hollywood, Florida.