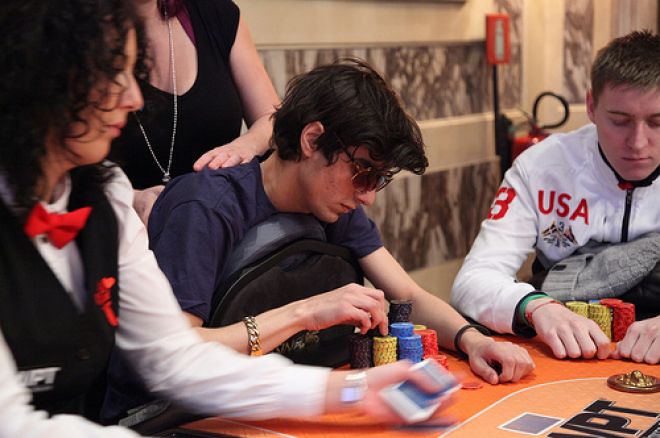 The World Poker Tour Venice Grand Prix continued on Tuesday with Day 2 action from the Casino Di Venezia. Appropriately, the three players atop the chips counts — Filippo Candio, Gabriele Lepore, and Andrea Dato — were all from Italy and looking to keep the title on their home soil. By the end of the day, only 27 players remained and Marcel Bjerkmann led the way.

When action kicked off, 89 players from a field of 155 remained in contention, and it didn’t take long for players to start hitting the rail. One of the first eliminations of the day was Melanie Weisner. According to the World Poker Tour Live Update Team It happened when Simon Ravnsbaek opened from the cutoff for 2,100, Weisner three-bet from the button, and Ravnsbaek four-bet enough to put his opponent all-in. Weisner called off for approximately 31,000 and the cards were turned up.

Weisner was in great shape to double, until the flop came down

. Ravnsbaek hit his six and picked up a flush redraw. Neither the

river helped Weisner and she exited the tournament floor.

Weisner was not the only notable to hit the rail in the early levels of Day 2. Guillaume Darcourt, Dario Alioto, Roberto Romanello, and Marvin Rettenmaier all failed to advance.

Another man who failed to survive was PartyPoker Pro Tony G. He began the day with a healthy 80,000, but couldn’t get anything going and dropped down to 16,000. He committed the last of this chips holding

only to be called by Gianluca Trebbi who was holding

. The board ran out clean for Trebbi, and he silenced the brassy Tony G.

Likewise, fellow PartyPoker Pro and WPT host Mike Sexton came up shy of the money. His demise came when Umberto Calabrese raised to 5,000 from the hijack and Sexton called from the small blind. Trebbi then exercised his option in the big blind with a three-bet to 17,500. Calabrese folded, and Sexton moved all-in for around 40,000. Trebbi made the call and it was off to the races.

Sexton was ahead preflop, but the

flop made him a major dog. The

was no help, and neither was the

. Sexton was eliminated on the hand while Trebbi chipped up to 450,000.

Not long after, Candio, who had finished Day 1 as the chip leader, followed Sexton out the door. It happened when he raised to 4,800 from early position only to have Jason Wheeler make it 12,300. The rest of the field folded and Candio moved all-in. Wheeler snap-called and Candio discovered the bad news.

Candio was behind, but the

flop delivered a set for him and the lead. Unfortunately, and much to Wheeler’s relief, the

river put a four-card flush on the board, giving Wheeler the win with his

Joining Bjerkmann as the end-of-the-day big stacks are Marko Neumann (384,400) Wheeler (348,200), James Akenhead (336,000), Andrey Gulyy (326,900), and Trebbe (323,500). They will also be joined by Kara Scott, who is the last PartyPoker Pro standing. Only 27 players remained when clock expired, meaning nine more players will need to be eliminated on Day 3 before the money was reached. Here’s a look at the WPT Venice Grand Prix payouts:

For more on the WPT Venice Grand Prix, be sure to visit the Party Poker Blog to see what Tony G and Mike Sexton have to say from the Casino Di Venezia.