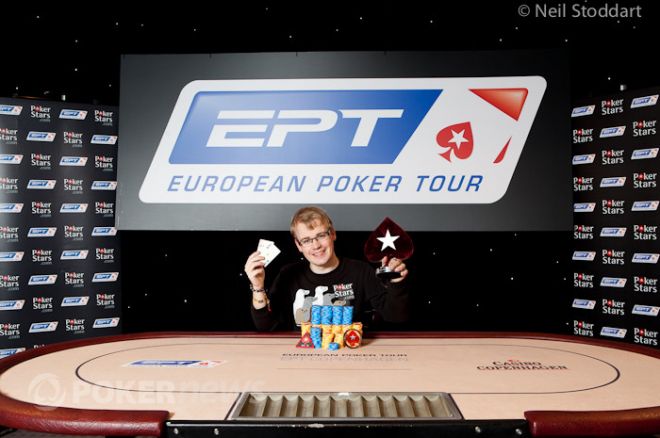 A total of 299 players participated at the Copenhagen stop of the PokerStars.com European Poker Tour and after six days of pulsating play, two members of Team PokerStars found themselves seated across the table playing heads-up for a first-place prize of DKK2,515,00 (€338,133).

It seemed as though you could not have written a more intriguing script, with the cherubic PokerStars Team Online player, Mickey "mement_mori" Petersen pitched into war against the more mature Team PokerStars Pro, Pierre "Zoutechamp" Neuville. Unfortunately, the script went out of the window, because the heads-up match was devoid of any of the razzmatazz that came before it.

Heads-up play lasted six hours and was dominated by the younger poker player. Neuville looked tired, weary and, like he had simply run out of ideas, while the time just seemed to go on, and on, and on. The action was stuck in a loop with Petersen raising Neuville out of the game until he would eventually find a premium hand, would move all-in, and find the double up. Neuville was so patient he would regularly go below the 10 big blind mark in order to wait for his premium hand to arrive.

Then finally, after six hours of nondescript activity Petersen finally managed to get Neuville to call an all-in showdown where Petersen was ahead. Petersen's

, and everyone was expecting a split pot. The flop of

increased the split-pot possibilities ten-fold, but the

on the turn gave Peterson a ray of light, and then the

But it wasn’t always that formulaic.

in a great spot against then chip leader Aage Ravn, who was holding

. The flop was clear of any mines —

on the turn blew Hudson's dream of a double up apart and sent him reeling to the rail. The first level ended with Hudson being the only confirmed casualty, and Ravn extending his lead at the top.

We waltzed into Level 24, with blinds at 12,000/24,000/3,000, and Steve O'Dwyer became the second person to leave the EPT Copenhagen final table. Once again Aage Ravn played the role of the conqueror, but this time he did not have to come from behind. Ravn's

of Ireland's latest resident, O'Dwyer, and he was eliminated in seventh place.

While Americans were being deported left, right and center, there was a Dutchman who had developed a seemingly perfect strategy. Niels van Alphen found pocket aces and then pocket kings, and each time a willing partner to play all-in poker. But just when van Alphen was seemingly finding premium hands for fun, a Pierre Neuville found one with just a little bit more strength. Van Alphen found

and the Dutchman was out in sixth place.

Steve O'Dwyer joined the commentary booth and told the viewers how impressed he was with the play of Jacob Rasmussen and then completely jinxed him! Rasmussen lost the majority of his chips to Bjarke Hansen after calling all-in on a board of

held up and as Hansen joined Petersen and Ravn at the top of the counts, Rasmussen was in deep trouble at the bottom.

With five big blinds and no choices left except to move all-in or fold, Rasmussen went about his business and went about it well. Ironically, it was the man who was responsible for his demise who became his chip benefactor. Hansen doubling Rasmussen up twice, first holding the mighty

While Rasmussen was experiencing a renaissance, Mickey Petersen was finding a set against the experienced Neuville to take the chip lead for the first time in the day. Interestingly, as soon as Petersen took the lead, Ravn couldn't win a pot, and he started to lose ground on the leaders in rapid fashion.

Then Rasmussen's luck dissipated as Petersen called his all-in holding

and a slight mathematical advantage, an advantage that would flip on its head after an

flop. Rasmussen found himself in a minefield with nowhere to turn and the

sealed his fate with a fifth place finish. After Rasmussen's exit Petersen enjoyed a 2:1 chip advantage over Bjarke Hansen and Aage Ravn, while Pierre Neuville had a mere 12 big blinds.

Neuville had to move his 12 big blinds into the middle sooner rather than later, and when he did he could not have timed it more perfectly. Mickey Petersen was his all-in opponent holding

and Neuville held a monster —

. Not that he needed it, but the flop handed Neuville quads, and increased his stack to around 25 big blinds, giving him a little more room to play.

Despite the Neuville double up, he was still short-stacked, but the continuing spiral of Aage Ravn had other plans. Ravn got his chips into the middle holding

against Hansen, who was holding

. Ravn looked likely to double up as the

hit the board but the

on the river dashed his hopes and play was three-handed.

Pierre Neuville reminded his two younger counterparts that there was life in the old bones. The Team PokerStars Pro doubled up against his teammate Mickey Petersen, after Neuville's

survived a flip against Petersen's

. Neuville then went on a mini heater.

Level 27 was a great one for Neuville as he glided to the top of the chip counts after a series of huge pots involving another clash with Petersen. With all three players on an even par, Bjarke Hansen raised to 100,000 on the button, Petersen three-bet to 255,000, Hansen four-bet to 550,000, Petersen moved all-in and Hansen called. Neuville was licking his lips as Hansen tabled

. The board changed nothing and Hansen was out and the intriguing heads-up encounter between Petersen and Neuville was set.

The European Poker Tour moves on to Madrid from March 12 through 17, so make sure you join us for all of the poker action.