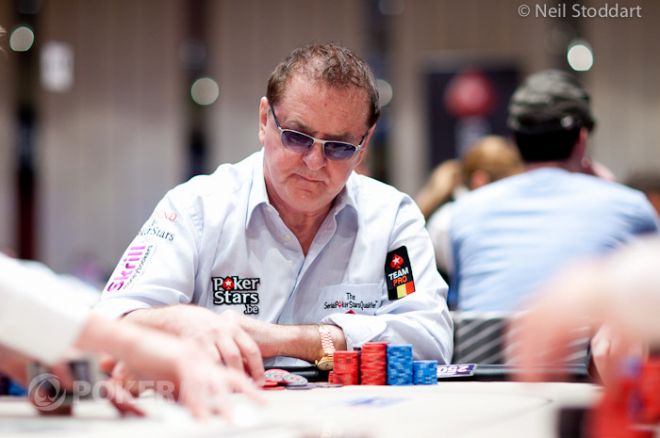 The PokerStars.com European Poker Tour Copenhagen Main Event Day 3 has been completed after the 72 players who took their seats in the Casino Copenhagen in the Radisson Blu Scandinavia Hotel, each with high hopes of becoming an EPT champion, were whittled down to just 24. Leading the way going into the penultimate day's play is Team PokerStars Pro Pierre Neuville.

Neuville has been a regular on the European Poker Tour since 2007 and he hit his first major cash two years later when he finished second to Antonia Matias in the EPT Vilamoura Main Event for a cool €257,681. Now he has the chance to go one better than that result by taking down this tournament and he is in pole position to do just that.

When play came to an end, after a shade over six 75-minute levels of play, Neuville bagged and tagged 780,500 chips which is quite a remarkable total seeing how he ended Day 1a armed with just 15,000! Today he played his usual slow, steady style and was hovering just over the average chip stack until the biggest hand of the tournament took place between defending champion Michael Tureniec and himself.

In the hand in question the blinds were 2,500/5,000/500a and Neuville opened the betting with a raise to 12,000 from under the gun. Tureniec called form the button and Jacob Rasmussen called in the small blind. The flop came down

and both Rasmussen and Neuville checked their option to bet. Tureniec fired a bet of 21,500, Rasmussen called only to see Neuville leap into action and make it 100,000. Tureniec made the call but Rasmussen got out of the way. The turn brought the

into the equation and Neuville lead for 100,000 then called as his Swedish opponent moved all-in. Neuville turned over

Neuville even crossed the magical 1,000,000 chip barrier later in the day but lost a couple of sizeable pots towards the end of proceedings to find himself with the 780,500 chips.

Leading the chasing pack is Alexander Manson on 730,000 chips. Manson won his seat in a satellite tournament on PokerStars and with every players that is eliminated his Return on Investment (ROI) increases. Making up the top five in chips are Aage Floenes Ravn (691,000), Alejandro Sanchez Fernandez (620,500) and Keld Volquardsen (523,500).

When play resumes at 1200 CET on Thursday Neuville will be kept company by two of his fellow Team PokerStars Pros in the shape of Martin Staszko (432,500) and Team Online's Mickey Petersen. A special mention has to go to Petersen for what could be the most epic comeback in EPT history. Down to just 7,300 and with blinds of 2,000/4,000/500a Petersen went on a mini-rush that saw him win a number of consecutive hands and eventually end the day on a more than respectable 451,500 chips!

The plan of action for Day 4 is to play down to the eight-handed final table regardless of how long that should take. Tune into the PokerNews Live Reporting pages on Thursday and follow all the action, as it happens, from the EPT Copenhagen Main Event.