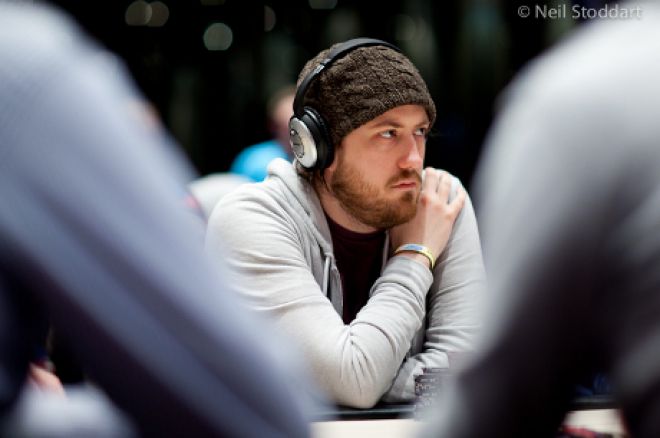 The PokerStars.com European Poker Tour Copenhagen Main Event kicked off Monday at Casino Copenhagen inside the luxurious Radisson Blu Scandinavia Hotel. A slightly less-than-anticipated crowd of 83 players exchanged DKK37,275 (€5,000) for 30,000 tournament chips and the chance to follow in the footsteps of poker's great players by becoming an EPT Champion.

Seven 60-minute levels were played on Day 1a, and during that time Steve O'Dwyer somehow managed to multiply his starting stack by more than six times, ending the day with a tournament-leading stack of 190,975. O'Dwyer initially flew under the radar and seemed to acquire his large stack "out of nowhere," and when the PokerNews Live Reporting Team asked him how he came about having such a substantial chip stack, he replied, "I just got lucky."

Obviously luck plays a major part, such as near the end of the night when O'Dwyer looked down to find a pair of kings in the hole and saw Giulio Mascolo four-bet jam for more than 30,000 chips while holding a much inferior pair of jacks. The kings held and O'Dwyer, runner-up at EPT London last year, saw his stack swell to the size it is now.

Hot on the heels of O'Dwyer is Finnish youngster Lauri Varonen who ended the day with 165,150 in chips. Varonen has some solid results to his name so far in his relatively short career, the highlights of which include an outright win in a €2,000 buy-in event in Finland that netted €82,688 ($120,961) and a 14th place finish in the $5,000 No-Limit Hold'em Triple Chance event at last year's World Series of Poker where he picked up $39,397.

Two former EPT champions made it through to Day 2 and are still in with a chance of becoming the first-ever double EPT champion. Roberto Romanello is the best placed of the duo having bagged up 115,475 chips, good enough for third place, and David Vamplew will return to Wednesday's Day 2 armed with 31,825 chips.

Joining the two former champions are two of PokerStars Team Pros in the shape of Arnaud Mattern and Pierre Neuville. They ended the day with 19,900 and 15,000 in chips, respectively, so both will have extra work to do when they return to their seats on Day 2.

Day 1b gets under way at 1200 CET (0600 EST) where a much larger crowd should fill the vast Casino Copenhagen tournament area. Amongst those already confirmed to play are Team PokerStars Pros Johnny Lodden, Viktor Blom and Theo Jorgensen, Martin Jacobson, former EPT Copenhagen champion Anton Wigg and a whole host of other talented individuals.


Follow all the action over on the PokerNews Live Reporting pages throughout the tournament and make sure you follow us on Twitter and like us on Facebook to stay up-to-date with all the very latest news and promotions from around the poker world.