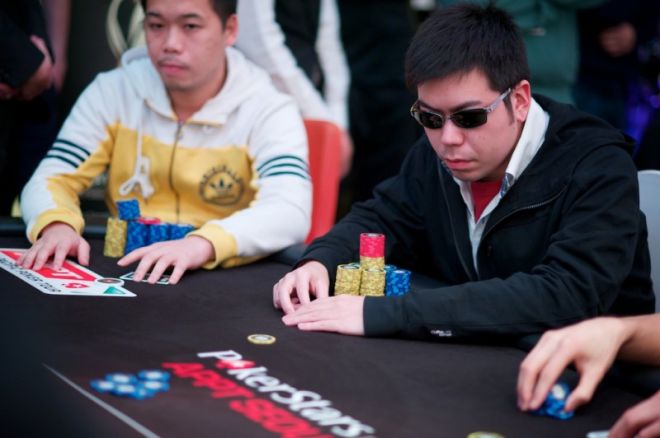 What started as 109 players on Day 2 of the 2012 PokerStars.net Asia Pacific Poker Tour Seoul Main Event was whittled down to just two tables, with one of the 16 remaining players set to be crowned champion on Sunday. The player in the best position to take it all down is Daisuke Endo, as he stormed his way to the head of the chip counts with 650,000.

Endo was on a roll late into Saturday evening. The biggest hand for Endo came when he took down a three-way all in holding

For only 16 to remain there had to be a lot of casualties throughout the day and it really didn’t take long for the players to start hitting the rail on Day 2. Some of the players who weren’t able to weave their way through the day included Ben McLean, Andrew Scott, Julian Hasse, Sparrow Cheung and Michael Mariakis.

Also never managing any momentum was the last remaining Team PokerStars Pro, Celina Lin. Playing with a short stack for much of the early part of the day, Lin eventually moved her stack all in holding

and ran into the

of an opponent. No help came for Lin and she was sent out the door.

As play went into the evening stomachs started grumbling as the dinner break was looming. Before dinner though, the bubble needed to burst and that player ended up being Barry O’Callaghan. The player to deal the fatal blow to O’Callaghan was Australia’s Michael Guzzardi.

O’Callaghan was all in holding

and was up against Guzardi’s

in the window was a bad card for O’Callaghan and when he received no help on the turn or river, he made his way out the door empty handed in 29th place.

With the bubble burst, a few more were eliminated with a KRW$5,000,000 min-cash before just 24 players went to a dinner break.

With full stomachs and rested minds, the returning players were set to play down to just two tables. Some of the players who exited just a short while after dinner included Darren Yoon in 21st place and Valeriy Chupin in 20th place. The last player eliminated before the chips were bagged up was Fakher Alizai in 17th place. Alizai was one of the chip leaders for much of the evening but that all changed toward the end of the night. In the end all it took was losing a flip holding

and it was all over for Alizai.

The final day of play at the 2012 APPT Seoul Main Event is set to begin on Sunday at 1215 KST (1915 PST Saturday) and the PokerNews Live Reporting Team will be back on the floor to catch all the action in the lead up to crowning a victor.