A Review of PokerStars' Zoom Poker 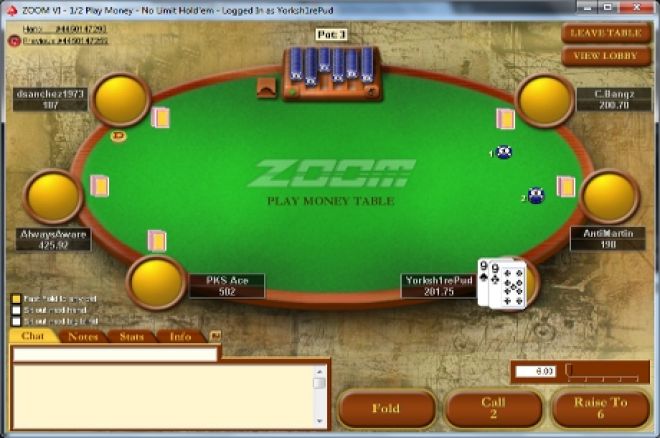 A couple of months ago, a member of the popular TwoPlusTwo forums started a thread asking about a folder discovered while looking through the installation files created on a computer when downloading PokerStars.

The folder was named "Blitz."

Immediately, the thread burst into life with members new and old coming to the conclusion that Blitz must be PokerStars' version of Rush Poker. An official from PokerStars then confirmed that the world's largest online poker site was working on a new "fast-paced way to play poker," which supported the poker community's thoughts.

All the new products that PokerStars launches are fully tested on the PokerStars test client, which is where I have been hanging out for the past few days, logging thousands of hands at lightening speeds. The name Blitz has since been changed to Zoom, and even though I'm personally not the biggest fan of the name Zoom, I also do not see what else PokerStars could have called it.

Plus, who really cares about the name.

What we are really bothered about is the answer to the following question — Does Zoom Poker play well?

The answer is a resounding yes — a big fat yes. Yes with a cherry on top if you like. It works like a dream. Currently, the test client only has play money Zoom available but word has it that real money games should be launched within a couple of weeks and live on the actual PokerStars client not long after.

What is Zoom Poker?

PokerStars describes Zoom as "a new fast-paced way to play poker. You’re always at the center of the action and can play more hands per hour than ever before," which sums it up nicely. For any of you who have played Rush Poker in the past, it is essentially that but with a couple of minor tweaks in animations and such. For those of you who have not sampled Rush Poker before, you are in for a real treat!

Zoom Poker plays exactly the same way as any other online cash game in that the card rankings are the same, the rules for betting are the same, everything is the same except one difference — a game-changing difference. As soon as you fold, you are removed from the table you were seated at and placed at a new table with different players! Your old opponents simply fade away and are replaced by new ones.

You do not have to wait for the action to be on you, either. Pick up

in middle position and simply click the "Fast Fold" button to be whisked from your seat and placed on a new table with new cards! Your opponents will not know you have folded until the action gets to you, by which time you could potentially have played two or three more hands.

Zoom Poker will allow players to play hundreds of hands per hour, potentially massively increase profits, and make climbing up the superb VIP scheme much easier than ever.

Zoom poker looks exactly the same as the standard PokerStars games I have played in the past, and all the themes I tried worked seamlessly. Shown below is a screenshot of the "Black" theme, fold, call and raise buttons, and me picking up a nice pair of sevens in the cutoff!

The Fast-fold button is just as clear as the rest, and it is highly unlikely you will be misclick-folding your pocket aces once you start playing Zoom.

Is Zoom Poker Really As Fast As The Name Implies?

In a word single word — yes. Although at the times I have been testing the software there have only been a two or three dozen fellow testers playing, the games have progressed rapidly. You could say they have zoomed along, my hands per hour figures easily reaching three figures. Once there is a full quota of players for the software to choose from, I am positive the games will be even faster.

What Formats Does Zoom Poker Support?

In the test client, there are only no-limit hold'em and pot-limit Omaha cash games available, but there are tabs for fixed-limit hold'em, Omaha hi/lo and one entitled "Other." This seems to imply that once PokerStars has Zoom Poker running perfectly in real-money games, it will be adding the full repertoire of games that are currently spread.

Can I Play Zoom Poker On My Mobile Device?

PokerStars recently launched a mobile platform for customers in the U.K. and Zoom Poker would be a perfect match for it. Recreational players and hardcore grinders could sign on during say, a short train journey, and easily log 500 hands all from their iPhones, iPads or Androids. Again, no official word has been given.

Ever since I first played Rush Poker I have wanted PokerStars to create its own version, and now that it has, I am personally over the moon with excitement. As a poker player who has limited time available to play, this is the perfect solution for me and could pave the way to PlatinumStar or even Supernova. And for those of you who are high volume players anyway, then Supernova Elite has just been brought within your reach.