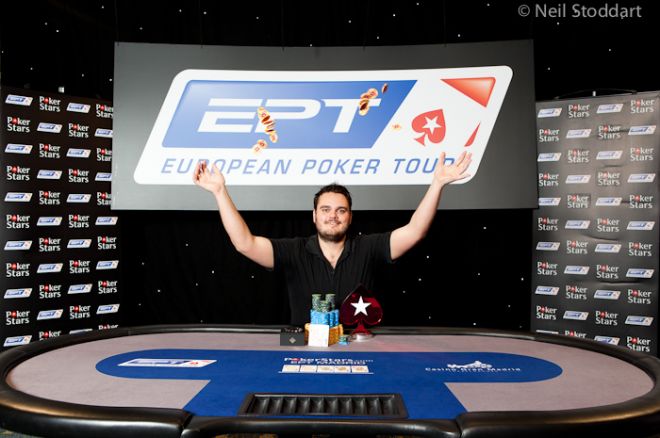 Of the 477 players who took part at the PokerStars.com European Poker Tour Madrid, only one could emerge victorious. The final table had a combination of experienced EPT veterans, online qualifier,s and recreational players. After around nine hours of play, Frederik Jensen was the last man standing, taking home €495,000 and the EPT title.

Jensen, who had previously come second in the Aussie Millions and made the final table of EPT Vilamoura last season, battle backed several times from being the short stack to secure his first major title.

Jensen beat PokerStars online qualifier Fraser MacIntyre heads up in a short battle. Jensen dominated the match and won at the first attempt with

At the start of the day, Ricardo Ibañez was the chip leader with nearly a quarter of the chips in play. However, despite his aggressive image on Day 4, Ibañez chose to sit back and let the others fight it out early in the day. Play at the final table went nearly two levels before the first player was eliminated. Jason Duval pushed with

— the latter flopping a pair of aces to send Duval to the rail.

EPT regular and third time finalist Nicolas Levi was next to be eliminated. The Frenchman, in his familiar hat, was unable to climb out of the short-stack hole that he'd been in since the beginning of the day and lost out when he failed to spike with

Another regular, the occasionally fiery Ilan Boujenah followed him out of the door soon after when the Israeli was coolered holding top two pair with

after all the money went in on the turn.

Play continued for over two hours before another chair was taken away from the table. With it went Ibañez, who was hoping to become the first Spaniard to win an EPT. His exit caused severe disappointment for his watching fans. It was during the 40,000/80,000 level and Stoenescu had raised from the small blind. Ibañez moved all in behind him from the big blind, and Stoenescu instantly called with queens which held against ace-deuce and catapulted Stoenescu into the chip lead.

flop, where the latter bet, then three-bet all in with

on the turn for two pair and dodged the

river to win the pot and take a monster chip lead.

Lopes, one of the stars of the French rap scene, was crippled as a result, but rallied briefly with a double up and subsequently won several more pots. He was undone, however, when he pushed with

over the top of MacIntyre's initial raise, only for Stoenescu to reshove behind him with

which held — though not without a sweat on the

After playing a bit longer, the three managed to thrash out a deal guaranteeing MacIntyre €290,000, Stoenescu €330,000, and the chip leader, Jensen, picked up €385,000, leaving with the rest to play for. Stoenescu busted out in third place in a big pot against Jensen when his

failed to hold against Jensen's

straight flush draw on a flop of

on the turn gave Stoenescu a few outs, but he missed on the

This left Jensen holding a 2:1 chip lead over MacIntyre and victory was sealed for the Danish pro after a short 15-minute heads up battle.

Kristy Arnett caught up with Jensen shortly after his victory.

The PokerNews Live Reporting Team will be back next week to bring you all the news from the next EPT in Campione, Italy!