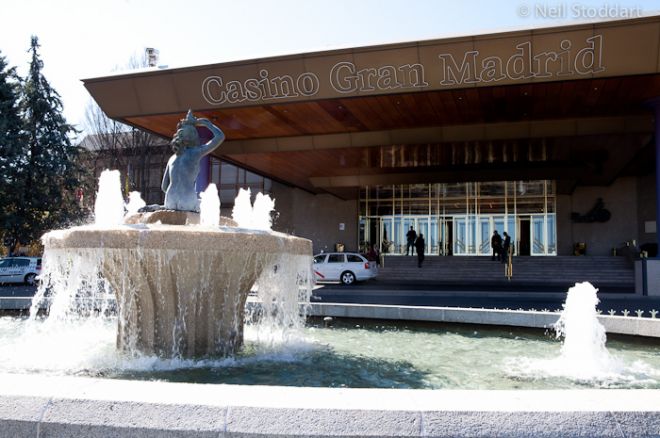 The ever-moving PokerStars.com European Poker Tour arrived in Spain's capital this week for the second installation of EPT Madrid. One season ago, this destination was chosen as the host city for the Grand Final, but a return to Monte Carlo this year has pushed the Madrid stop up into the middle of the schedule. Monday marked Day 1a, and a small crowd of 125 turned up to the Casino Gran Madrid with the requisite €5,300 in tow. Some big Sunday action on PokerStars kept most of the notables off the live felt, but a fair smattering of them chose to kick off their Main Event on Monday. When the chip bags came out around 9:00 p.m., Sergiy Baranov had managed to amass the biggest stack of 152,500 chips.

As you'd expect of an event carrying their banner, the Team PokerStars Pros hit the felt hard on Day 1a. The newest member of the team, the Czech Republic's Martin Staszko, was cursed with a short day, as was Poland's Marcin Horecki. Horecki was pot committed with

board, and Juan Jose Chavez ran down a flush with

to send him off. Pierre Neuville, was able to stave off elimination until the last level of the day before running his

, to beat the end-of-day rush to the exit.

That left four surviving members of Team PokerStars: Alex Kravchenko (28,900), Henrique Pinho (25,100), Toni Judet (20,100), and Arnaud Mattern (18,500). Though Mattern's stack is the shortest of the bunch, his effort is not to be overlooked. Mattern quite possibly broke his foot on the way to the casino this morning, and he was forced to spend the day heavily medicated with his foot propped up on ice.

Marcel Bjerkmann was one of the very first players to be eliminated when he ran pocket kings into pocket aces early in the first level. Roberto Romanello fell a couple of hours later when an opponent hit a gutshot on him, and Juha Helppi's

suited was no match for Ronald van de Berg's pocket kings, ending the Finn's day around the midpoint.

Also failing to survive the day was EPT Loutraki champion, Zimnan Ziyard. His fall came in a monster pot with fellow EPT regular, Martins Adeniya. The latter shoved the river after taking control of the action, and Ziyard spent a long while in the tank before making a hero call with just bottom pair, sixes with a four kicker. Adeniya had turned a full house with ace-ten, though, and that knockout pot vaulted him into a massive early chip lead. The evening session was a bit more tepid for Adeniya, and he finished up the day with a respectable 95,000 chips to more than triple his starting stack.

Eight levels were booked on Day 1a, and a new batch of players will take their seats on Tuesday for the Day 1b flight. Foremost among those we'd expect to see registered are the two members of Team PokerStars Pro Spain, Ana Marquez and Juan Manuel Pastor, and we've also got the likes of Bertrand "ElkY" Grospellier, Eugene Katchalov, Johnny Lodden, and Leo Fernandez set to join up, as well.

Day 1b kicks off at 1200 CET (0400 PDT), and our Live Reporting team will be back inside the ropes to bring you all of the action as it plays out.