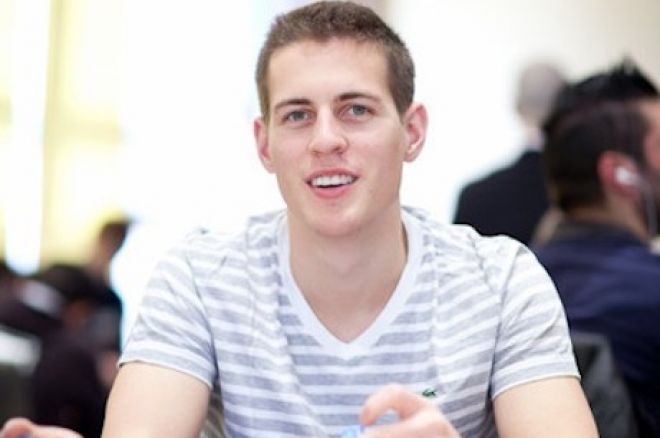 On Day 2 of the PokerStars.com European Poker Tour Madrid, 264 players returned to the felt for five, 75-minute levels and the field was gradually whittled down to 112. Despite both upstairs and downstairs rooms being used, it did not take long for everyone to be squeezed into the same area where Juan Navarrate began the day as chip leader. The slightly earlier than usual finish was fairly popular with players, many of whom decided to make use of the extra time, moving on to the famous Bernabeu Stadium for Real Madrid's Champions' League clash with CSKA Moscow.

McDonald picked up a huge pot when according to his Twitter, he five-bet all in with ace-jack against an aggressive player, who was holding kings. McDonald's ace-jack won the huge pot, putting him in contention for the chip lead about three-quarters of the way through the day. Although that was probably the biggest and most important pot he won, the final hand of the day probably summed up how everything had gone for him — he found aces when a short stack pushed with

, and McDonald had quads by the turn.

The PokerStars Team Pros suffered a decidedly mixed day but Johnny Lodden (180,900) Angel Guillen (95,000) Henrique Pinho (61,400) and Alex Kravchenko (52,000) all made it through into the third day with the potential of a €545,000 pay-day still in sight. Lodden's story was of particular note because he was sitting with just 28,300 in the last level (14 big blinds), but suddenly ascended like a rocket and finished the day well above average.

Arnaud Mattern, Fatima Moreira de Melo and the hometown hope Juan Manuel Pastor departed very early on in the day, hampered by their short stacks. Romanian Pro Toni Judet joined them on the rail a while later. Nacho Barbero had an impressive stack and was into six-figures fairly early on before he ran king-jack into aces on a jack-high board after his opponent Mark Jansen sneakily flat-called the Team Pro's reraise. This pot relieved Barbero of most of his stack and he was eliminated soon afterward.

Other players who will not be moving on include, Jake Cody, Anton Wigg, Michael Tureniec, Michael Eiler, as well as such luminaries as Martin Jacobson, Chris Moorman, Per Linde, Dominik Nitsche, Kevin Iacofano and Todd Terry. On the plus side, all of these players might be able to enjoy themselves more at the soccer match!

Day 3 kicks off Thursday at 1200 CET (0400 PST) and will continue through the money bubble all the way to the final 24. Join the PokerNews Live Reporting Team for all the updates from EPT Madrid.