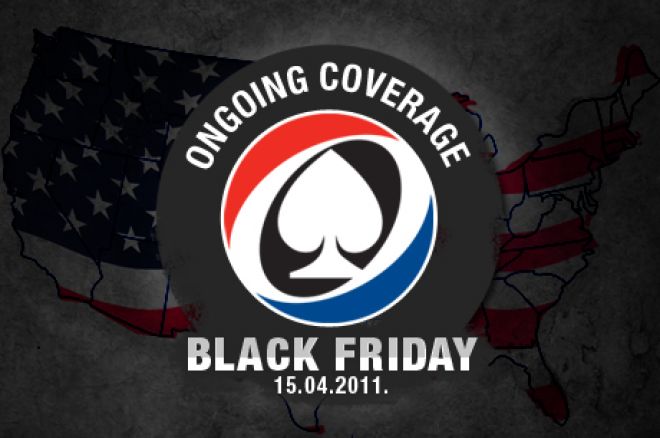 When Black Friday struck, the poker world was taken by storm — an extremely dark storm. With social media being such an open area to express one's feelings or thoughts, many poker players took to Twitter on what would turn out to be the darkest day in poker history. Some of the biggest names in the game expressed their emotions about the actions that occurred including Vanessa Selbst, Phil Galfond, Randy Lew and Jeff Madsen. Even the most well-known poker player of all time, Doyle Brunson, had something to say.

You know something is big in poker when mainstream media gets ahold of what's going on. ESPN is regarded as the forefront authority in sports and had a small segment on the indictments and shutdown of poker sites on air. This is what came from the ESPN Poker Twitter account that helped to spark many of the reactions from players.

@ESPN_Poker: According to @GamblingComp, all the indicted sites, around the world, will be down within 48 hours. #gg

When something big happens in poker — and Black Friday could easily be regarded as the biggest thing to ever hit poker — many players and fans reach out to notable authorities within the community in hopes of getting more information on what's happening. Oftentimes, these "notable athorities" are the more well-known players in the industry. Being so very well known in the industry, Selbst was overwhelmed with messages and made sure to let everyone know that she knew just as much as they did at the time. She also did what she could to remind everyone to attempt to stay calm and point them in the right direction to attempt to help the situation.

@VanessaSelbst: Sorry everyone who is messaging me, I don't have any more info than anyone else. I will let you all know when I know ...

Mike "Timex" McDonald might have easily been one of those players who might have been freaking out much more than was good for him. He stated that he felt the sky was falling in his reaction tweet.

@MikeMcDonald89: Every few months people think the sky is falling in online poker. For the first time ever I’m one of them. WTF

Others such as Steve O'Dwyer, Justin "Boosted J" Smith, Jonathan Aguiar, Brandon Adams, Christian Harder and Jason Senti were all also in the same boat of gloom, which was completely understandable. Here's what they offered on Twitter.

@BoostedJ: Will work for food and shelter

@jonaguiar: the poker world is going to consume about 3x as much weed as usual today, buy stock in swisher and zigzag

@jonaguiar: The mayans were only 18 months off predicting the end of the world, pretty impressive

@PBJaxx: Well, on the day I sent the US gov’t a LOT of money to finish up 2010 taxes, they shut down my income stream.

Some other poker players decided to try and make light of the situation at hand while some tried to be as positive as possible. A few did what they could to poker fun at the issue, but we all know there was still some deep, true meaning behind their comedic reactions.

@philgalfond: Does anyone want to buy a slide?

@Randy_Lew (@nanonoko): hmm…might need to consider buying from the value menu again at McDonals if things don’t work so well

@mawaxman (@Matthew_Waxman): Pretty excited I ran out of excuses not to hang out with my family on Sundays. (now that online poker and ftball are gone)

Jeff Madsen was one of those that took the glass-is-half-full approach.

@jeffmadsenobv: I think one thing is abundantly clear at this point... TIME TO HAVE A SICK WORLD SERIES

Even the Godfather himself, chimed in, although he was more calling the online players to the live realm.

@TexDolly: Now maybe we will see if these online "superstars" can play real poker. Ante up suckers!

Furthermore, poker players weren't the only ones a bit worried and upset with the day's happenings. PokerNews' very own Kristy Arnett had this to say.

More and more reactions poured in over the course of the next week while further information was revealed, but our space here just wouldn't be able to fit them all. One can certainly look at the Twitter reactions from poker players as a whole and make the conclusion that this was not a good day for poker at all, and the players felt it. As far as PokerNews has known, there hasn't been a mass Twitter outcry like we saw when Black Friday blind-sided everyone. In fact, we highly doubt anything will match it in the near future. The only thing we can even imagine has the potential to do so is when online poker becomes legal in the United States. If and when that day comes, the poker world may drown the Twitter-verse with tears of joy.