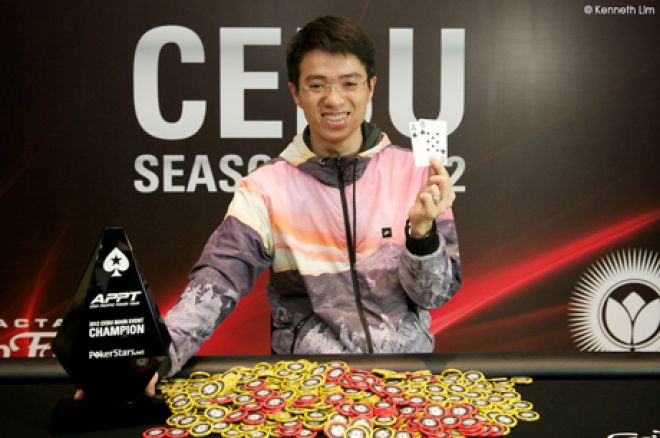 On Monday, after an exciting day of poker, the PokerStars.net 2012 Asia Pacific Poker Tour Cebu Main Event come to an end. Hoang Anh Do proved too strong for the competition besting the field for the title and PHP 5,927,000 first-place prize.

When the day began, there were nine players with stars in their eyes. Those stars would quickly turn to disappointment as the players started hitting the rail one by one.

Antoine Amourette started the day with only a few big blinds and although he hung on to life in dramatic fashion, eventually his day came to an end in ninth place. He was followed out the door by Jae Kyung Sim in sighth place, before Jacky Wang hit the rail in seventh place.

The last hand of Wang's tournament began when he three-bet shoved form the big blind after Alistair Duff opened the button. Duff ended up making the call and trumped Wang's

. The board changed nothing and Wang was sent to the rail.

When Sameer Rattonsey exited in sixth place, he left his fellow countrymen Amit Varma to wave the flag for India. Varma started the day as the chip leader, but slowly saw his stack whittle down to a pittance of what he began the day with. Varma could no longer cling to his chips and was sent home in fifth place.

Up until that point, play was ticking along at an expected pace as Australia’s Michael Kanaan was still in contention to become only the third player ever to win both an ANZPT title and an APPT title. Unfortunately that dream would came to an end in fourth place when Kanaan's

This is when things started to really slow down. Play was reduced to a crawl as the three remaining players started trading chips. Eventually the exhilaration of the play picked up as both Do and Duff found themselves all-in at multiple times. Duff was almost sent home three times, but kept hanging on, surviving his all-in moments. After three hours of three-handed play, Duff was finally sent home in third place.

Heads-up didn’t last long as Do and Wong ramped up their aggression. On the inevitable last hand of the night, Do rivered a stronger two-pair, holding

board. And with that, it was all over. When the last hand was dealt, Do let out a scream of celebration and was greeted by a small rail of friends as Vietnam now has a new poker champion.

Just because we're done here, doesn't mean the live reporting stops. PokerNews' worldwide leading Live Reporting Team is constantly all over the globe providing updates from the biggest and best tournaments on the circuit, so be sure to check those events out as well. We'll see you at the next stop.