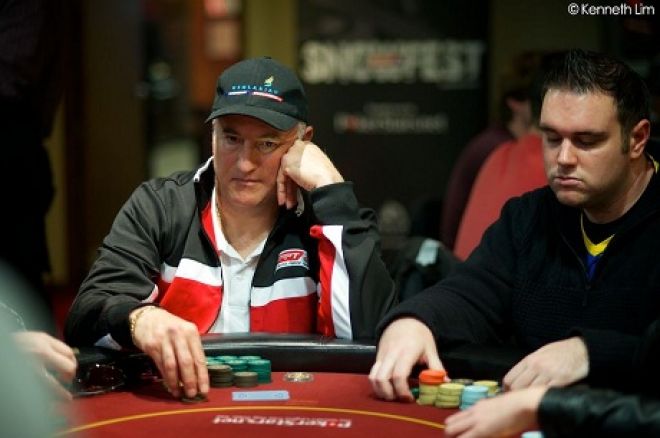 The 2012 PokerStars.net Australia New Zealand Poker Tour Queenstown Snowfest Main Event continued on Wednesday, with Day 1b action taking center stage. A total of 49 players took to the felt on the second day one flight and by the end of the night, just 31 remained. It was Ken Demlakian who emerged as the end-of-day chip leader, bagging up a hefty 70,750 in chips.

There was a stacked field at the start of Day 1b, but not all the players could join Demlakian in securing a Day 2 berth. Some of those who began the day but fell by the wayside include Jacky Wang, Jesse “On The Mac” McKenzie, Alex Lynskey and last year’s ANZPT Queenstown sixth-place finisher, Tom Grigg.

Grigg had a roller coaster day, but his tournament life eventually came to an end when he four-bet with

and ran into the

of an opponent. No ace fell on the board and there would be no back-to-back Queenstown final tables for Grigg.

Those who did far better than the above players and will be right in the midst of the action come Friday’s Day 2 include James Honeybone, Ivan Zalac and Jonathan Dangio. Also surviving the night were the likes of Billy Argyros, Matt Wakeman, Michael Fadersen, Ben McLean and Ricky Kroesen.

No player on Day 1b managed to get even close to David Allan's Day 1a chip lead, with Demlakian currently starting Day 2 with the sixth largest chip stack. Of course, there is still another day one flight remaining and so a new chip leader could emerge come Thursday evening. The top ten chip counts from Day 1b can be seen below.

Top 10 Chip Counts From Day 1a

The 31 survivors from Day 1b will be back at the tables this coming Friday, while the third and final day one flight will begin on Thursday at 1230 NZST (Wednesday 1700 PDT). Make sure to join the PokerNews live reporting team as they continue to bring you all the action from the 2012 ANZPT Queenstown Snowfest Main Event