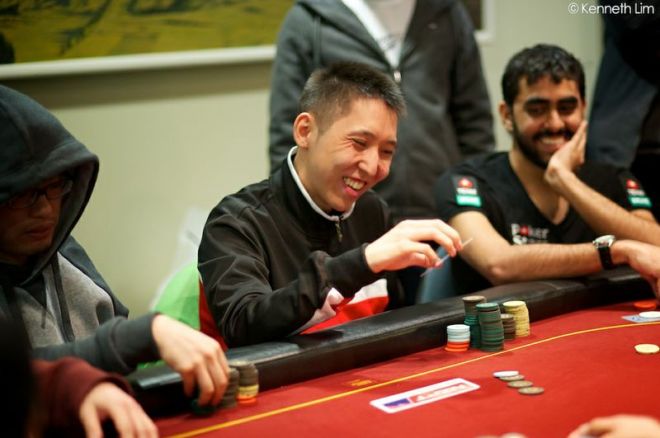 The third and final day one flight of the 2012 PokerStars.net Australia New Zealand Poker Tour Queenstown Snowfest Main Event came to a close on Thursday. At the end of the day it was Nurlan Boobekov who emerged as the chip leader, bagging up a stack of 69,200.

The 49 entries from Day 1c, in combination with the 51 from Day 1a and the 49 from Day 1b, makes for a total field of 149 players. That amount of entries creates a NZ$402,300 prize pool, with all the players chasing the NZ$110,600 first-place prize. With 27 players surviving Day 1a, 31 surviving Day 1b and the 29 still alive after Thursday’s Day 1c, it is exactly 87 players who are still in contention to become the Queenstown Snowfest champion.

Some of those who started Day 1c, but fell short of securing a Day 2 berth include Jan Suchanek, Keith Walker, John Apostolidis, Matty Yates and Australian Poker Hall of Fame member, Lee Nelson. The end of Nelson’s tournament saw him run into the

of Alicia Sale. The short-stacked Nelson simply showed a

as he exited the tournament area.

Managing to use the final starting day as a spring board into Friday’s Day 2 include Aaron Benton, Jarred Graham and Kristian Lunardi. 2011 APPT Melbourne champion Leo Boxell also survived Day 1c and is still in contention for the Queenstown Snowfest title.

Another couple of players who will be looking to make an impact in the late stages of this tournament are Team PokerStars Pro Bryan Huang and PokerStars Team Online Pro Roy "GodlikeRoy" Bhasin. Huang and Bhasin both partook in Day 1c and both managed to bag up some chips at the end of the day. Huang managed to do do far better than Bhasin, with the top ten chip stacks from Day 1c shown below.

The overall chip leader heading into Day 2 is David Allan from Day 1a, who holds a stack of 98,200. Interestingly the top five chip stacks are all from Day 1a, with Ken Demlakian from Day 1b and Day 1c's Boobekov filling the sixth and seventh spots on the leader board.

Day 2 will play out in a somewhat unique way, with half the field partaking in three levels of action on Day 2a at 1230 NZST Friday (Saturday 1700 PDT). The other half will play three levels on Day 2b at 1600 NZST Friday (Saturday 2100 PDT). The surviving players from both Day 2 fields will then be combined later that same evening. Make sure to join the PokerNews live reporting team as they continue to bring you all the action from the 2012 ANZPT Queenstown Snowfest Main Event.