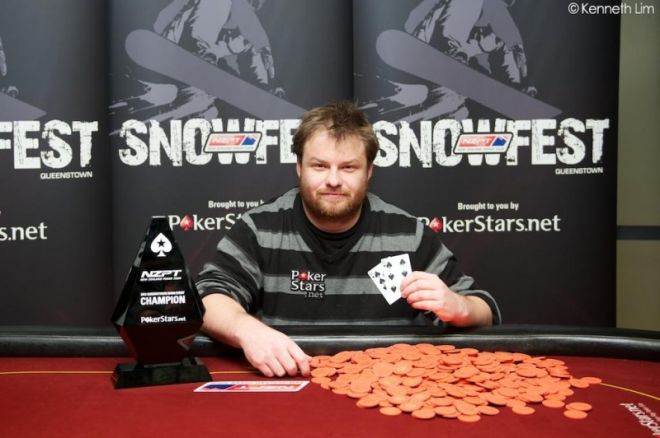 The 2012 PokerStars.net Australia New Zealand Poker Tour Queenstown Snowfest Main Event came to an end on Sunday. The player who walked away with the title, all the glory and the NZD$110,600 first-place prize was Australia's David Allan.

The final day started with nine players all hoping to make it where Allan stands right now. However, there could only be one winner and so eight players had to fall short. The first elimination occurred within the first ten minutes of the day, with the short-stacked David Evans being sent home in ninth place. Evans got his stack in good holding

flop, but was unfortunate to run into an ace on the river.

The next player to find the rail was Evans’ fellow short stack, Ivan Zalac. It was Ricky Kroesen who eliminated Zalac, with Kroesen’s

. Zalac was eliminated in a gallant eighth place after winning a side event earlier in the week. It didn’t take long from there to eliminate Team PokerStars Pro Bryan Huang in seventh place.

Huang’s last hand started with Allan opening the pot with a min-raise from under the gun. Jordan Westmorland then three-bet to 39,000 and it was on Huang in the blinds. He opted to four-bet all in for around 200,000 and with Allan out of the way and a call from Westmorland, Huang’s tournament was at risk. Huang needed plenty of help holding

, but it was help that would never come as the kings stayed in front to send Huang home.

At this point Kroesen managed to win a big coin-flip to double up against Allan and would be one of the chip leaders as the play started to slow down. Eventually it would be Matt Wakeman who was sent home in sixth place. Wakeman’s elimination came just after the first break of the day, with Wakeman shoving around 13 big blinds from the cutoff holding

. Westmorland called on the button holding

and Wakeman would need some help. Wakeman joked that he had a wheel draw, but the

board wasn’t what he was looking for and he was sent packing. After that, Westmorland held the chip lead and was looking good with his big stack.

During five-handed play, Westmorland would lose a huge amount of his chips to multiple players and Demlakian would re-claim his chip lead. The fourth level of the day was when the action came to a halt and it wasn’t until the fifth level that the next elimination would occur. It was almost two and a half hours since the last bust-out, but inevitably it had to happen and unfortunately for David Zhao, he would go home in fifth place. Zhao was bleeding chips for quite some time before got his stack in holding

. A board featuring four clubs improved Westmorland’s hand even more and he sent Zhao home to usher in four-handed play.

It didn’t take long from there to find our fourth-place finisher and that would be Australia's Kroesen. After struggling to find a good spot or good cards to make a move for over an hour, Kroesen’s stack was at its smallest and would need to double up soon. Eventually Kroesen moved all in from the button for 270,000 with

, but unfortunately Westmorland woke up with

in the big blind and made the call. The flop of

wasn’t bad for Kroesen, but he couldn’t catch up through the

The three-handed battle would last for more than an hour, but it would eventually be Westmorland who would find his way to the rail. Westmorland’s tournament came to an end at the hands of Demlakian. Westmorland got his chips in on the turn of a

and was in front for now, but Westmorland had a huge amount of outs. Unfortunately he couldn’t catch one of those outs and was eliminated in third place to see us reach heads-up play.

After eliminating Westmorland, it was was Demlakian who started heads-up with a slight chip lead over the ever-aggressive Allan, but it wouldn’t last for long. Allan surged in front very quickly and it stayed that for way for while, but then the lead then chopped and changed several times until Demlakian seemed to have a big enough lead to run away with it.

However, Allan wouldn’t go down without a fight, managing to manoeuvre his 20 big-blind stack all the way to reclaim a handy lead. From there, Allan never looked back and after a two-hour heads-up battle, the last hand of the night occurred. It started with David Allan limping the button and Ken Demlakian checking the big blind. Both players then opted to check the

flop and it was on to the

turn. Demlakian led for 50,000 here and Allan called. The

river was flipped onto the felt and Demlakian led for 60,000. Allan then announced a raise to 170,000 and Demlakian shoved all in. Allan made the call and Demlakian's tournament was at risk. At showdown, Demlakian tabled

for two-pair, but it wasn't strong enough for Allan's

, with the flush eliminating Demlakian as the runner-up and crowning Allan as the victor.

Just because we're done here, doesn't mean the live reporting stops. PokerNews' worldwide leading Live Reporting Team is constantly all over the globe providing updates from the biggest and best tournaments on the circuit, so be sure to check those events out as well. We'll see you at the next stop.