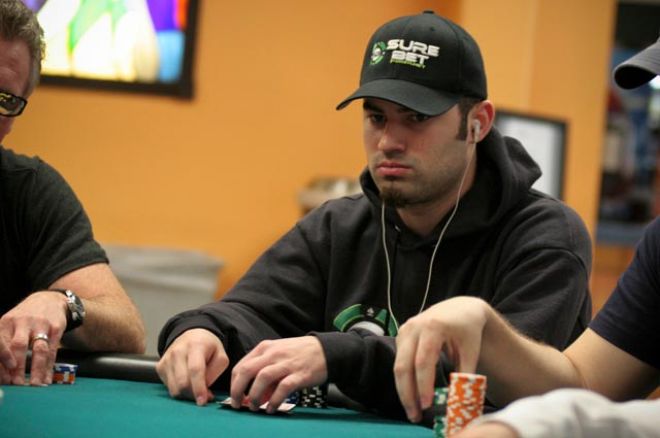 After a long day of action, Day 2 of the 2012-13 World Series of Poker Circuit IP Biloxi presented by Southern Comfort 100 Proof wrapped up on Sunday. Six players remain of the 90 that started the day and Kyle Cartwright leads the field with 2.232 million in chips.

Cartwright is a former WSOP Circuit champion, notably winning the 2010-11 WSOP Circuit Harrah's St. Louis Main Event for $142,290. He will take his massive chip lead into the final day and only five players stand between him and Circuit ring number five. The players in his way are former November Niner John Dolan (1.2 million), Dennis Pasentine (947,000), Brad Johnson (721,000), Cory Wood (590,000) and Jesus Cabrera (333,000). Mark "Pegasus" Smith is the only player with five WSOP Circuit rings, a feat Cartwright can equal by claiming this title.

As for Day 2, it was a brutal day of big stacks colliding and river cards, both saving tournament lives and dashing championship aspirations. The eliminations came quickly and the pace never relented. Those who returned but did not make the money included Kurt Jewell, Aaron Massey, Jacob Bazeley, Ben Mintz, Justin Truesdell and Chris Parsons.

failed to connect with the board and Dolan’s pocket queens handed him his walking papers.

With just a dozen players remaining, Charles "Woody" Moore and Dolan were the two largest stacks at their table. On one hand, the two built a sizable pot by the turn with the board showing

for trips, but was shell-shocked when a king fell on the river to bust him from the tournament.

After that, Rex Clinkscales and Cartwright got in a huge, all-in preflop confrontation, despite both players looking like a lock for the final table with their stack sizes. Cartwright held

and Clinkscales held pocket queens. The board ran out

After Moore and Clinkscales were sent out the door in astonishing fashion, the 10 remaining players moved to one table.

Gary Friedlander was the first player to exit when he ran into Cabrera’s pocket kings. Shortly thereafter, Cartwright and Patrick Eskandar got the money in on a flop of

The next elimination occurred when Peter Shashy moved all in with

and Pasentine called with pocket sixes. Shashy didn’t connect with the board and Pasentine's sixes held up. Then, the last elimination of the night came, as if to mimic something straight from a Hollywood movie.

and Hatley was sent packing.

Cartwright, with 37.2 percent of the chips in play, has a huge chip lead heading into Monday's final table. With over a million in chips more than Dolan's second-place stack, Cartwright is in prime position for a record-tying fifth WSOP Circuit gold ring. The six remaining players will return at 1200 CDT (1800 BST) to play down to a winner. Stay tuned to the PokerNews Live Reporting pages for all the live action.